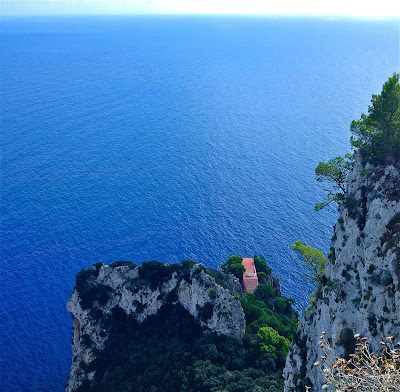 In Alberto Moravia’s Contempt (Il Disprezzo, 1954), a young screenwriter, Riccardo Molteni, narrates the dissolution of his marriage to Emelia against the backdrop of his having been hired to write a film adaptation of Homer’s The Odyssey. Moravia takes Homer’s characterization of Ulysses’ twin hungers “for home and wife” and literalizes them into a disturbingly bleak yet acidly comic depiction of a modern man trying to comprehend his wife’s contempt for him.

In the first sentence, the word “perfect,” used retrospectively by Molteni to describe the first two years of his marriage, informs the reader that, as a narrator, Molteni is unreliable even to himself. In trying to understand what happened to the “perfection” of his marriage, Molteni conducts a purely intellectual, existential self-interrogation akin to that of Beckett’s Molloy but as coldly analytical, obsessive and solipsistic as that of the badger-like narrator of Kafka’s “The Burrow.” The frequency of words like “bored, ““ordinary” and “monotonous” underscores Molteni’s dissatisfied state as he tries to uncover the origins of Emelia’s contempt, a response understandable to the reader given Molteni’s navel-gazing inability to decide or act. Molteni attempts first to frame Emelia’s coldness in terms of the institutional marital roles he expects her to play as “a born housewife, with, “in her love of home…more than the natural inclination common to all women,” and as sexual serveuse. The couple’s sexual relations become reduced to pure mechanics, stripped of any human intimacy. When Molteni justifies the acquisition of a new apartment as an effort to satisfy his wife’s alleged domestic inclinations, he ponders Emelia’s motives at the very moment the couple have sex on the empty apartment’s dirty floor, interpreting her temporary ardor as a functional expression of her love of home – a scene at once appalling and absurdly comical.

All of this would be rich fodder for depicting a failed modern marriage, but Moravia also turns Contempt into a meditation on art, materialism and the alienated, disaffected state of post-war Italy. The title fits a pattern in Moravia’s other novels of the period: Boredom, The Conformist, Bitter Honeymoon. Unable to tease apart boredom from happiness or to see his relations with Emelia as any kind of partnership, Molteni fears his marriage to this “uncultivated, simple typist” from a class lower than his own imperils his “precious literary ambitions.” Though he aspires to write for the theatre, he lacks courage to pursue his own art. In a lengthy passage on the economics of cinema (among other things, Contempt offers stimulating observations about the film business and the intersection of art and commerce), Molteni describes himself as essentially a cog in a system of production run by the producer and director, voicing a complaint that might issue from any worker in a bureaucracy: “he is himself chosen, he does not choose.” He justifies writing for money using the same rationale used for acquiring the new apartment: an effort to provide for Emelia’s domestic, material desires. Despite his complaints, it’s telling that we learn little of what Molteni’s serious art might be.

The tenuousness of both the marriage and Molteni’s commitment to art is amplified when the film’s producer, Battista, with a leering interest in Emelia more evident to the reader than to Molteni, invites the couple to his villa on Capri where they’ll work on The Odyssey with the German director, Rheingold. With this shift in setting, three visions of how The Odyssey might be filmed are respectively put forth by Battista, Rheingold, and Molteni. The “great ape” Battista, whose pronouncements on cinema echo Mussolini’s call for a renewed Italian film industry to produce uplifting spectacles, wants a Hollywood-style action film. Rheingold demands a focus on Ulysses’ relationship with Penelope that will delve into its Freudian aspects:  “a film about a man who loves his wife and is not loved in return.” The descriptions of these proposals – including a catalog of kitsch elements by Battista and a lacerating rant by Rheingold against James Joyce’s treatment of The Odyssey in Ulysses - make for among the high points of Contempt’s comedy. Squeezed between the Scylla and Charybdis of these proposals, the purist Molteni rejects any approach that would eviscerate the presence of the gods and not take the poem on its own terms, asserting a “belief in reality as it is and as it presents itself objectively.” In this vision one can see echoes of his relationship to Emelia, a passive craving for things to be simply as they’re supposed to be, emphasized by Molteni’s frequent and unsurprising praise of disinterestedness and “purity,” equated at times with a desire for self-extermination. Although Molteni dismisses Rhinegold’s desire to put The Odyssey “on the dissecting table” to reveal its “internal mechanisms,” Molteni’s approach to understanding his own marriage suggests “…the particular gloom, entirely mechanical and abstract in quality, of psychoanalysis”:

I must have an explanation with her, I must seek out and examine, I must plunge the thin, ruthless blade of investigation into the wound which, hitherto, I had exerted myself to ignore.

Though Molteni is oblivious, odious even, he retains the murmur of a sympathetic aspect, for example, in his rejection of the ugliness of Battista and Rheingold s visions of art and in occasional astute glimpses of himself as “an unfortunate creature…torn between egotism and affection, incapable of choice or decision.” He is at perhaps his most sympathetic when, rowing into Capri’s Red Grotto after Emelia has left him, he hallucinates her return, a moving depiction of loss and one of the few times Molteni abandons the rigidity of his purely intellectual ruminations, drifting instead into poetry and dreams in an underworld setting right out of The Odyssey. But if Molteni is a Ulysses figure, it’s in his being lost at sea in his relationship to his wife; the perils he battles in trying to reach her are largely of his own making. A weak, ineffective man who can only rationalize, Molteni is incapable of heroic action or of transcending the psychological, economic and social conditions of his time. Seeking explanation, he is blind to the origin of his wife’s contempt, even when she ascribes the destruction of their love to his “character.”

When at the novel’s end Molteni returns to Capri after his wife’s symbolically absurd death - her neck broken when Battista swerves his red sports car to avoid an ox-drawn cart - he appears scarcely more enlightened than on the novel’s first page. Enshrining the memory of his wife in Capri’s “great sea spaces,” that abstract blue haze of sea and sky from which Ulysses sailed past this island purported by some to be the home of the sirens, Molteni’s relation towards Emelia in death holds the same distance it held for her in life, as though he’s remained tied to the mast, ears plugged, alone with himself – or more comically, as though he’s become like the isolated indigenous blue lizard of the Faraglioni rock towers just off Capri’s shore. He finishes writing “these memories,” hoping for an “an image of consolation and beauty” to free him. If consolation and beauty are to be found amid the deep existential unease conveyed in Contempt, they are almost exclusively those of art, of encountering a masterfully achieved and compelling novel that refuses easy answers and strips away illusions. Comfort reading? Hardly.

Other posts from the Contempt group read to which this belated post belongs may be found at the links below: