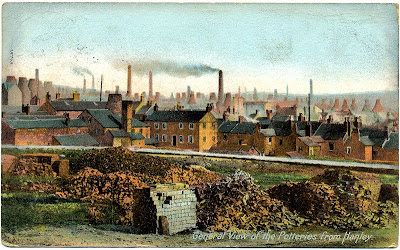 What a waste not to have read Arnold Bennett until now. Whatever ill-informed impression I might have had concerning the writer vanished in reading Anna of the Five Towns (1902), the first of Bennett’s several novels set in his home region of the Potteries, that string of North Midlands towns (six actually, but Bennett thought five a more poetic number) that fill a valley famous as the center of Britain’s ceramics industry.

The story is ostensibly simple. Anna Tellwright, a schoolteacher who shares a home with her young sister Agnes and miserly father Ephraim, is wooed by a fellow teacher, Henry Mynors, at around the same time her father bequeaths to her a surprising fortune built on shrewd investment in and exploitation of the region’s numerous pottery works.  Maintenance of the fortune involves calling a debt on a factory teetering on the abyss, complicating Anna’s moral sentiments as well as those she has for Willie Price, humble son of the factory’s owner. A brief respite from these pressures is provided to Anna by a fortnight’s sojourn on the Isle of Man, in a chapter that is itself an island surrounded by Bennett’s affectionate but critical portrait of life in the Potteries.

Like many novels of its time, Anna of the Five Towns thematically addresses the social, economic and moral disposition of its society and in particular the limited opportunities for women. The novel is unusually attuned to economics, explicitly questioning the mechanics of capitalism, “This mysterious begetting of money by money.” Anna, as the troubled, conscientious daughter of a profiteer, serves as a counterweight to such monetary obsessions: “the arrival of money out of space, unearned, unasked, was a disturbing experience, affecting her as a conjuring trick affects a child.” Though heir to vast wealth, Anna can use it only as dictated by her father, who’s comfortable with her dunning his debtors but parsimonious in allowing her money even for household expenses. Frustration at her status appears in her awareness of Henry Mynors’ relative freedoms: “She envied every man…men were not fettered like women.” A marriage to Mynors promises a partial way out, but at an expense: “Anna would marry into freedom, but Agnes would remain the serf. Anna had noticed that in families the youngest, petted in childhood, was often sacrificed in maturity.”

Though the language used to relate Anna’s efforts to escape her fate is often tranquil, almost ambling, the efforts themselves have a wild, reckless edge. At a religious revival, Anna cannot commit to the “conversion” experience expected by those around her. Rather, in constant doubt as to how she, a teacher, could be “allowed to have charge of a class of immortal souls,” she remains suspended in religious skepticism. The subject of conversion is quietly and deliberately abandoned. Even more audaciously, Anna involves herself in a hazardous deception amounting to fraud. The capacity to shock also appears in the novel’s dark turn at the end, when the narrator, with a fiercely indignant frankness, pillories the human agents within the machinery of economic ruination.

Anna of the Five Towns feels slightly askew in relation to other realist novels of its time. It’s as though Bennett has refused to let go of the dominant form of the late 19th century novel and, where others had begun to abandon the structure for more modern constructions, instead simply moved his modern sensibilities into the novel’s old Victorian home. For this reason, the narrative - and the unspoken thoughts of Anna, straining against the limits of her society - feel slightly wrong-sized, like Lewis Carroll’s Alice grown too big for the house. Something is odd, off, shifted.

This is apparent in the narrative’s complicated relationship with the materiality of Victorian culture, most notably in a remarkable scene when Henry Mynors first accompanies Anna to the Tellwright home, where they find themselves alone in the kitchen. The romantic moment the reader expects is interrupted by the omniscient narrator’s almost comically plopping an old oak dresser into the scene, describing it at length then moving onto other objects (“a catalogue of furniture,” the narrator calls it, just as the reader is thinking the same thing). The dollhouse-like setting inspires Mynors to call the kitchen “the nicest room I know,” and then to add (sly Bennett), “It wants only the mistress in a white apron to make it complete. Do you know, when I came in here the other night, and you were siting at the table there, I thought the place was like a picture.” Pictures and photographs figure throughout Anna of the Five Towns, as though to underscore the novelist’s self-conscious depiction of reality.

Another unusual element of Anna of the Five Towns is Bennett’s off-handed depiction, sometimes subtle, sometimes not, concerning the toxic Potteries environment. The narrator drops hints of wilted flowers, the courage of wearing white amid so much soot, the fires and choking pollution from the factories. As Anna gazes out the window towards “clear stretches of sky” with “thick-studded clusters of stars brightly winking,” below her, across the fields

…long fires of burning ironstone glowed with all the strange colours of decadence. The entire landscape was illuminated and transformed by these unique pyrotechnics of labour atoning for its grime, and dull, weird sounds, as of the breathings and sighings of gigantic nocturnal creatures, filled the enchanted air. It was a romantic scene, a romantic summer night, but…

This is one of the earliest novels I’ve read in which the environmental degradation of industry features prominently, though less as a subject in itself than as noisy background, adding to the novel’s off-kilter quality. The disconnect between setting and tone is apparent in the pleasantries and courtships that go on placidly, almost pastorally, among citizens enveloped in smoke.

Irony in Bennett takes many forms – one often wonders whether he is playfully pulling the reader’s leg – but it can be withering. When Henry Mynors shows Anna around “the banks,” where the reader learns in granular detail of the various stages of the ceramics manufacturing process, the narrator drops in elements of the social organization and working conditions of the factory:

The paintresses form the noblesse of the banks. Their task is a light one, demanding deftness first of all, they have delicate fingers, and enjoy a general reputation for beauty: the wages they earn may be estimated from their finery on Sundays. They come to business in cloth jackets, carry dinner in little satchels; in the shop they wear white aprons, and look startlingly neat and tidy. Across the benches over which they bend their coquettish heads gossip flies and returns like a shuttle; they are the source of a thousand intrigues, and one or other of them is continually getting married or omitting to get married. On the bank they constitute ‘the sex.’ An infinitesimal proportion of them, from among the branch know as ground-layers, die of lead-poisoning – a fact which adds pathos to their frivolous charm.

That last line might be Evelyn Waugh. Bennett’s subtlety is acute enough that a footnote to this passage in the edition I read appears to miss the laden irony of “infinitesimal” and suggests Bennett is being “a little sanguine” here about a local industry where lead-poisoning deaths exceeded a thousand over a two year period. But Bennett ends many passages with a similarly sarcastic flourish, usually aimed at an economic element in social relations.

These barbs are sharpest in the novel’s attacks on complacency regarding the human toll of capital and industry. Here is Bennett’s narrator describing the beginning of an inquest into the economically-driven suicide that rocks the town:

People were talking in groups on the broad steps in and in the vestibule. All knew of the calamity, and had received from it a new interest in life. The town was aroused as if from a lethargy. Consternation and eager curiosity were on every face. Those who arrived in ignorance of the event were informed of it in impressive tones, and with intense satisfaction to the informer; nothing of equal importance had happened in the society for decades.

There’s little to redeem such matters. The reader’s sympathies, run through the novel’s “good” main character, can’t entirely take hold. Anna, though better than the society around her, is inadequately perspicacious, too entrapped by social demands to escape them, with a timidity that keeps her enmeshed in the smoke and fiduciary concerns of the Five Towns. When even the heroine of the book is unable to surmount  “all the pretences by which society contrives to tolerate itself,” one is left with an almost cynical pessimism. Or rather, one might be, were it not for the charming, modern oddity of this novel, the richness with which it depicts its world, a generous, often piercing humor, and a discernible sense of an astute, playful writer having a great deal of fun without losing sight of what’s important. I’ll be reading more.
Posted by seraillon at 12:41 PM