Arnold Bennett Group Read, a General Update, and a Couple of Quotations

I had promised back in May a group read of Arnold Bennett’s The Old Wives’ Tale for July, so since it’s already past the middle of July, I want to give those who are still interested (especially, perhaps, myself) an update - and a bit of breathing room. While I’d expected to be done with the book by now, I am scarcely a third of the way through, and hope that potential participants will not be disappointed if I postpone the group read until Labor Day week (September 5-12), perhaps a fitting time given the book’s concerns with the world of work and economics, and certainly a more propitious time for me given an unexpectedly challenging spate of work and other commitments these last couple of months.

In lieu of a post about literature, I’ll just add to this update a couple of quotations from my recent reading, offered as a promise of more attention to the blog to come soon.

The first is from Nicolas Bouvier’s The Way of the World, an account of an 18-month journey Bouvier made with his artist friend Thierry Vernet in a Fiat from Geneva to the Khyber Pass between 1951 and 1953. I thought it a marvelous travel book (albeit one that rather exudes male privilege, so one might read Bouvier’s Swiss compatriot Isabelle Eberhardt or the works of Freya Stark, who visited western Iran 20 years before Bouvier, to regain a bit of balance). Anyway, here is the 24-year-old Bouvier in the Balkans - the “heart” of Europe, if France is said to be its “brain” - early in his journey, early in his growth:

The invited us into dark kitchens, into little, ugly, comforting sitting-rooms for enormous bellyfuls of aubergines, kebabs, melons which sprayed open under a pocketknife. Nieces and frail old relatives – because at least three generations would be sharing these cramped quarters – would have already, excitedly, set the table. There would be introductions, low bows, phrases of welcome in charming, old-fashioned French, and conversations with these old bourgeois who were passionate about literature, who killed time by re-reading Balzac or Zola, and for whom J’accuse was still the latest literary scandal from Paris. Spa waters, the ‘colonial Exhibition’…when they reached the end of their recollections, there would be silence, and then the friend who painted would go off in search of a book on Vlaminck or Matisse. All the dishes would be cleared from the table, and we would leaf through the book while the family looked on in silence, as though a ceremony they couldn’t participate in was taking place. This gravity touched me. During my years as a student I had earnestly potted ‘culture’, done my intellectual gardening, analyses, glosses, taken cuttings; I had dissected various works of art without grasping their dynamic value. At home the stuff of life was so well cut, distributed, cushioned by habit and institutions that there was no space for invention, it was confined to decorative functions and only thought of as something ‘agreeable’ – that is, immaterial. In Serbia, things were quite different; being deprived of necessities stimulated, within certain limits, an appetite for what was essential. Life was still demanding and greatly in need of form, and artists – by which I mean any peasant who knew how to hold a flute, or daubed their wagons with sumptuously mingled colours – were respected intercessors, or bonesetters.

The second quotation is from Jean Giono’s Que ma joie demeure, which I’m re-reading in the French original, though the passage is copied from Katherine Allen Clarke’s English translation, Joy of Man’s Desiring. The setting is the Plateau de Valensole, in the southern part of Giono’s beloved Alpes de Haute-Provence, sometime in the late 19th or early 20th century. Bobi and Jourdan, a stranger and the farmer who has welcomed him and asked his help, are returning to the farm on a cold winter’s night after a journey to see a man about a horse. They are a bit lost.

The lights had disappeared. They had been slowly turning away from them. The ground rose gently. The cold solidified the night like cement in the bottom of the mortar box.
“Look at the signs,” said Bobi.
Before them, in the distance, golden signs had just blazed forth. They looked like letters. One was a capital L. And after this letter was a sort of apostrophe. They were level with the ground. There was a sign that made a capital E, but the E from time to time became an F. They were really signs and they were indeed of gold. But they could not be read.
Jourdan tried. He squinted his eyes. He said: “L-apostrope-e-f, l-apostrophe-e-f. What does that mean?” As they drew nearer, the letters changed shape. The one that was an L had almost become an O, a little square, and the apostrophe had melted into it. The other letter became an M laying on its side. “We ought to mark them down on paper,” said Jourdan to himself. To know. Prescriptions are sometimes written out like that in strange letters, and he who does not know them looks at them and does not understand.”
“L-apostrophe-e-f-o, l-apostrophe-e-f-o-m,” he said to himself, like one of those great, formless words that must have signified the sun, the moon, and the stars in the mouths of the first men.
“Is it the house,” said Bobi.
Jourdan pulled in the reins. The horse stopped.
“What?” asked Jourdan.
“The signs,” said Bobi; “it is the house. Marthe has lit the fire. She has closed the door and the window shutters, and there in front of us is the light flowing through the joints around the door and the shutters.”
Jourdan remained silent for a moment.
“One who knows is worth ten who seek,” he said. 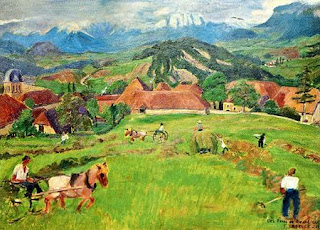 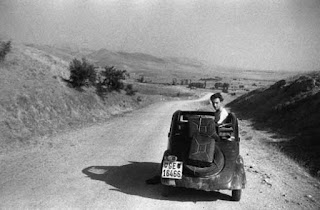