While I’m still in the afterglow of a short trip to China, here’s a favorite Chinese poem (despite its being not quite the right season for it). A friend and I discovered this poem years ago in an elementary school reader while exploring the old schoolroom in the marvelous Chinese settlement of Locke, California, in the Sacramento River Delta region. The poem was given no authorship or translation attribution in the reader, and despite much looking I’ve been unable to find it reproduced anywhere else. It’s clearly about Hangzhou’s famous West Lake, but that’s all I know about it (and would be deeply appreciative should anyone happen to have additional information on the poem’s source).

AUTUMN NIGHT AT WEST LAKE
Su Dike goes sidewise;
Pai Dike stretches crosswise.
It’s like a rainbow sidewise;
It’s also like a rainbow crosswise.
The moon is misty from the Rainbow Bridge.
The bridge is like a bow;
The moon is like a bow.
Shadows of two green hills fall to the east of the bridge –
A high peak in the south,
Another high peak in the north.
In the haze of autumn the two peaks are vague –
It is vague in the south.
It is vague in the north.
Posted by seraillon at 1:04 PM No comments:

The Spirit of the Human Verb, Darked and Stupyfied

My previous post on Chinglish brought to mind a favorite poem from Robert Graves, who clearly appreciated a good bit of mistranslation:
¡WELLCOME, TO THE CAVES OF ARTÁ!
“They are hollowed out in the see coast at the municipal terminal of Capdepera, at nine kilometer from the town of Artá in the Island of Mallorca, with a suporizing infinity of graceful colums of 21 meter and by downward, wich prives the spectator of all animacion and plunges in dumbness. The way going is very picturesque, serpentine between style mountains, til the arrival at the esplanade of the vallee called “The Spider”. There are good enlacements of the railroad with autobuses of excursion, many days of the week, today actually Wednesday and Satturday. Since many centuries renown foreing visitors have explored them and wrote their eulogy about, including Nort-American geoglogues.” From a Tourist leaflet.
Such subtle filigranity and nobless of construccion
Here fraternize in harmony, that respiracion stops.
While all admit their impotence (though autors most formidable)
To sing in words the excellence of Nature’s underprops,
Yet stalactite and stalagmite together with dumb language
Make hymes to God wich celebrate the strength of water drops.
¿You, also, are you capable to make precise in idiom
Consideracions magic of ilusions very wide?
Alraedy in the Vestibule of these Grand Caves of Artá
The spirit of the human verb is darked and stupyfied;
So humildy you trespass trough the forest of the colums
And listen to the grandess explicated by the guide.
From darkness into darkness, but at measure, now descending
You remark with what esxactitude he designates each bent;
‘The Saloon of Thousand Banners’, or ‘The Tomba of Napoleon’,
‘The Grotto of the Rosary,’ ‘The Club’, ‘The Camping Tent’.
And at Cavern of the Organ there are knocking streange formacions
Wich give a nois particular pervoking wonderment.
¡Too far do not adventure, sir! For, further as you wander,
The every of the stalactites will make you stop and stay.
Grand peril amenaces now, your nostrils apprehending
An odour least delicious of lamentable decay.
It is some poor touristers, in the depth of obscure cristal,
Wich deceased of thier emocion on a past excursion day.
Posted by seraillon at 1:37 AM 2 comments: 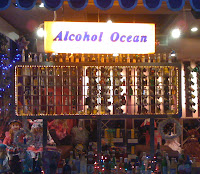 Here are a few “Chinglish” discoveries from my recent trip through southern China (plus a couple from an earlier trip), offered in the spirit of celebrating not only fine translations but the occasional poetic joys to be found in inadvertently poor ones (as well as to commemorate humbly my disastrously poor Mandarin in an impromptu speech I found myself having to give while there):


“Welcome, so do you! Your journey is more interesting.”
“Warm Prompt: This elevator has been disinfected.”
“Warm Suggested: Caution Wet Floor.”
“Protecting tree, please not shinning.”
“No explosive. No weapon. No pet. No balloon.” [Posted at the entry to a railway station]
[Items on a restaurant menu in Kunming]:
“Cook in Soy Sauce Pig Hand”
“Tingle and Hot Crisp Fish”
“Mountain Pepper Pomegranate Flower”
“Sheet Iron Bullfrog”
“The Shredded Ginger Fries the Meat”
“The Frog Embrace the Jade Pillar”
“Red Meat Insid Snow”
“The Old Adopted Mother Bitter Vegetable Flower”
“Fuck Fris Potato Silk”
“Cool Mix the Vegetables and Big Hot Pepper”
“Fuck to Fry of Small and Yellow Fish”
“Fragrant Frailty Hair Belly”
“Have a Happy Reunion the Cool Vegetables of Exquisite Article”
And finally, from an astonishingly lengthy set of rules for a hotel in a small city in Jiangxi:
“Bibulosity, bustup, and hullabaloo and other behavior which will disturb other are prohibited by the Hotel.”
(In closing - a thoughtful article on Chinglish):
Posted by seraillon at 2:25 PM 1 comment: