“The prickly problem of the free woman” - Pérez Galdós’ Tristana 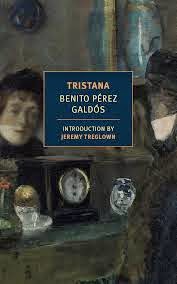 Spanish writer Benito Pérez Galdós, author of vast, sprawling novels such as Fortunata and Jacinta, can be accessed somewhat more expediently via his 1893 novella Tristana, recently published in a new translation by Margaret Jull Costa. The work’s relative compactness diminishes nothing; Tristana possesses a snow globe quality, an entire world in miniature, presented and circumscribed as though under glass.

In its age-old situation of an older man’s relationship with a young woman, Tristana feels nearly iconic. Pérez Galdós sets the tone early, through a tableau vivant in which he first introduces, recounted at arm’s length by an unnamed narrator, his two central characters.

Don Juan López Garrido – “Don Lope” - is “an agreeable-looking gentleman…like a figure in a Velázquez painting of one of Spain’s regiments in Flanders.” His name, “with more than a whiff of the theater about it,” echoes that of dramatist Lope de Vega and links him to Spain’s vanished golden age. As though living in the wrong period, Don Lope also possesses a morality of “his own…an amalgamation in his mind of the ideas floating around in the metaphysical atmosphere of the age, like the invisible bacteria that inhabit the physical atmosphere.”

Sitting at table with him in this portrait is a young woman a third his age, Tristana, about whom the narrator initially keeps the reader, along with the rest of Madrid, guessing as to her precise relation to Don Lope: is she servant, niece, daughter - perhaps even wife? With dark eyes, skin of “pure alabaster,” red lips, and “small teeth …like pieces of concentrated crystal” - a subtly amusing description that might have been lifted from a Siglo de Oro poem - she too is linked to the past. Even her name derives from her mother’s obsession with the theater of the golden age, “which created an ideal society to serve as a model and example to our own crude, vulgar realities.”

Whatever air of chivalry may wrap Don Lope in the novel’s first lines, however, abruptly dissipates when we learn that, having taken in the adolescent Tristana as his charge after the death of her father and madness of her mother, the manipulative old man has within mere months added her “to his very long list of victories over innocence” and kept Tristana “as if she were nothing more than a tobacco pouch.” From the beginning, then, Pérez Galdós pointedly rejects a literature that aims to present an ideal society, leaping instead directly into the world’s “crude, vulgar realities.”

The ensuing narrative delicately traces relations between Tristana and Don Lope, beginning with further background, then, coincident with Tristana’s awakening to the injustice of her situation, slowing to portray her growing self-awareness and desire to make something of herself. A clandestine attachment with a young painter, Horacio Diaz, occupies the bright center of the story, until the trajectory begins a descent marked by adverse irruptions of life - distance, illness, the impositions of an older generation – that imperil youth, love, hope and self-determination.

Tristana contains a thematic concern with the position of women articulated explicitly without ever becoming polemical. Pérez Galdós devotes considerable attention to Tristana’s awakening, “the doll’s stuffing…gradually changing into the blood and marrow of a woman.” But as Don Lope’s maid Saturna succinctly states the case, a young woman without independent means faces but three choices: marriage, the theater, or prostitution. The word “freedom,” observes Saturna, “isn’t one that sounds good in a woman’s mouth.” Tristana ponders whether there may be some other way: “Do I understand so little of the world that I’m thinking what’s possible is, in fact, impossible?” Pérez Galdós’ direct manner in raising these thematic concerns is evident in the young woman’s simple statement, upon arriving at a moment of illuminated self-awareness: “Here I am.”

This directness continues as Tristana questions other constraints on women’s lives - in education, sexuality, marriage and motherhood. Inspired by Horacio, who encourages her to “find the formula…to perhaps resolve the prickly problem of the free woman,” Tristana looks to art as a possible path, bemoaning women’s education in the arts as “insubstantial…intended to help girls bring a good son-in-law home.” She asserts her sexual independence in defying Don Lope’s threats in order to be with Horacio, declaring, “I am not an adulteress; the only person I am deceiving is someone who has no right to tyrannize me. My infidelity, therefore, is not infidelity at all.” Marriage she sees as an arrangement between willing individuals, not some unity of souls: “Living as one for the other! Two for one! What nonsense…” During a lengthy discussion with Horacio concerning the possibility of their having children, Tristana fiercely asserts her view of fatherhood as little more than a mechanical function; were she to become a mother, the child would be hers, not theirs.

But these important questions recede, and the novel takes an unexpected narrative turn, when Horacio’s decision to take care of an infirm aunt sends him indefinitely to the country. What has amounted largely to exposition is now supplanted by the letters Tristana and Horacio write to one another. Mixing flirtatiousness and playfulness, coy mockery, ironies and ecstasies, and a darker premonitory undercurrent, these letters form the energetic, exquisitely inventive centerpiece of Tristana, Pérez Galdós’ young lovers express themselves in feverish flights of prose, their hopes buoying them above the surrounding social muck, their love seeming to push language to new limits. They conjure lovers’ nicknames, subjugate words to their desires by twisting spelling and exaggerating phonetic components, pull in foreign terms and phrases, draw on literary references, and employ interjections, exclamations and nonce words where a proper word doesn’t suffice, as when Tristana writes to Horacio:

…I am positively stuffed with knowledge. Goodness, how much I knoo! In the space of eight days I have swallowed more pages than you could buy lentils for five thousand pesetas. If you could see my little brain from inside, you would be frightened. Ideas are positively fighting for space in there. I have far too many of them and I don’t know wheech ones to keep. I will as easily bite into a volume of History as into a treatise on Philosophy. I bet you don’t know what Señor Leibniz’s monads are. And no, I did not say nomads. And if I come across a book on Medicine, I don’t rear back from that either. No, I wade straight in. I want to know more and more and more. By the way…no, I won’t tell you now. Another day. It’s very late; I’ve stayed awake so as to write you; the pale torch of the moon is burning out, my love. I can hear the cock crowing, the harbinger of the new day, and already the sweet juice of henbane is flowing through my veins…Go on, my rustic love, admit that the bit about henbane made you laugh. Anyway, I am exhausted, and I am going to my almo lecho, my sacred couch, yes sir, and there’ll be no turning back: almo, almo.”

This epistolary section of Tristana also limits our knowledge of the action to what is being reported by the two young lovers, at last allowed to speak for themselves nearly free of the dispassionate narrator. In the spaces between these letters, though, one reads an entire invisible story, outlined by the difficulties of maintaining the relationship through nothing but writing.

Pérez Galdós complicates the resolution of the “prickly problem” first by this love affair, in which art loses out as Horacio turns to painting “flowers and dead animals” as a “cargo of sentimentalism” flies back and forth on the mail carriage, and then by injecting a dose of reality so abruptly factual – an illness and surgery, evoking Charles Bovary’s botched clubfoot operation in Madame Bovary - as to irreparably contaminate any “idealized” conception or promise of happiness. It’s an invention that relieves Pérez Galdós of fleshing out how Tristana might have fought for her independence (and according to the introduction came in for criticism), but it also stresses the unpredictable “cruel realities” life can impose in a moment and serves as a potent physical symbol of the cutting off of Tristana’s potential.

The glow from the lovers’ letters fades as reality intervenes and as the softening of Don Lope’s hard edges brings him again closer to Tristana in scenes that render him all too wretchedly human. The years go by; age, infirmity and submersion in the facile comforts of religion take their toll. The narrative, again recounted matter-of-factly by the outside observer, regains its snow globe quality. The tossed-off question posed by this narrator at the novel’s end manages to be both affectingly poignant and, in its detachment and irony, sharply pointed, underscoring how lugubriously such a triste tale might have been told. In Tristana's overt rejection of past literary approaches, and its vivid, assured portrait of artistic aspiration and the multifold impediments to its realization, perhaps the telling of the story, the creation of art, is as much the subject of Pérez Galdós’ novel as is Tristana herself. As an artistic creation, balancing piercing social criticism with a tremendous sympathy and tenderness, this short, beautiful novel is anything but unrealized.

Pérez Galdós; I'm indebted to him for first making me aware of this writer, and hope to follow him in exploring Pérez Galdós' longer novels.