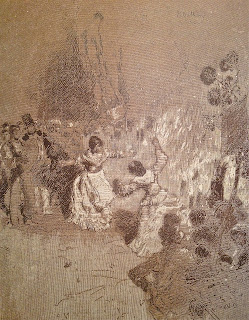 Readers who know the women of Naples as portrayed in Elena Ferrante’s recent “Neapolitan Quartet” may well appreciate the work of journalist, publisher and fiction writer Matilde Serao (1856-1927). One can hardly imagine Ferrante without Serao, who preceded her by more than 100 years. A celebrated heroine of Naples, Serao attempted to capture the city in prose, with a particular focus on the range of experiences of its young women.

Unmarried Women (Il Romanza della fanciulla, 1885), an early suite of five stories, functions in a manner similar to James Joyce’s Dubliners in attempting to use different stories to convey the ambiance and character of a city. Serao delves into particularities of Naples with remarkable granularity – its squares, churches, cafés, homes, fashions, popular songs and plays, games and forms of leisure, manners, colloquialisms. Ever present and looming above the city is the “usual small eruption of Vesuvius, which no one in Naples notices.”

There’s an encouraging, even adoring attitude towards Naples in these stories: a rapt appreciation of sea and light, of warm evenings, of the city’s romantic qualities, “the beautiful, simple, ardent, good-natured, and poetic love of Naples that takes place among the flowers and trees, overlooking the sea, beneath the stars, during the unforgettable evenings created for this love.”  Yet Serao is also a sharp social critic, attuned to the vicissitudes of the lives of the young women she depicts, from poor girls barely scraping by to rich wives trapped in dead marriages. A strong sociological element works to present her characters beyond the roles Neapolitan society expects of them as workers, teachers, daughters, girlfriends, wives, mothers. That the stories aim principally at illuminating the texture and conditions of these lives appears evident in their slightly leaden, moralistic endings. For example, in “Girls’ Normal School,” Serao concludes her sketch of exactly what’s promised by the title by flash-forwarding three years from the schoolgirls’ exit exam to catalog what’s become of them - a rather depressing account. In “In the Lava” (the title again giving away the subject), an eruption of Vesuvius fatalistically brings to a close the rare and glorious moments of leisure captured in the preceding pages. The weightiness of these endings is a minor quibble; Serao’s careful construction, rich observations, exacting detail and manifestly personal interest in her subjects raise her stories well above mere urban ethnography.

In terms of style, Serao belongs to the verismo school of 19th century southern Italian naturalism inaugurated by Giovanni Verga and Luigi Capuana. The concern of the veristi with transmitting a faithful picture of society, through realistic detail and a focus on common people, shows itself in Serao’s concentration on the downtrodden as well as in the Verga-like economy of her language, which can pack a good deal into a few phrases, as in a passage from “The State Telegraph Office (Women’s Section)”:

All at once, over the angry, complaining voices, drawled in boredom, over the explosions of amorous complaints and office jealousy, a hiss was heard: the director was coming in Immediately, in a chorus of voices that ranged from soft to loud, sharp, slow, quick, and tardy, these words were heard: “Good morning, Director.”

Though Serao’s male literary models may have felt that women had no business writing - Mary Ann McDonald Carolan, in her foreward, notes that Serao’s work was ridiculed by prominent male critics and that Verga reportedly referred to her dismissively as a “hermaphrodite” - Unmarried Women makes clear the blind spots of the male veristi in giving depth to women’s experiences. Many of Serao’s women meet terrible ends: in thankless, wretched jobs; oppressive family structures; poverty and lack of opportunity; intolerable situations impossible to maintain without going mad or committing suicide, which many do. Serao’s dismissive attitude towards marriage is thus hardly surprising. In “In the Lava,” three mothers agree that “if they were to live their lives over again, with the experience of existence that they had, they would never have gotten married, they told their daughters so – but they were such obstinate creatures...” Serao uses precise detail as a tool to underscore the difficulty of these lives, as when the narrator matter-of-factly mentions that a nursery school teacher has responsibility for “134 pupils,” or tells of another who, having no one with whom to share her problems, takes her life by swallowing capsules of Spanish Fly and leaves behind a journal addressed to an imaginary being: “The journal was sent to her older sister; it was horrifying.”

But Serao’s women are also brave, funny, determined, proud, defiant against the enormous odds stacked against them in a culture where women’s financial independence was not only scorned, but also prohibited by law. A strong anti-authoritarian, rooting-for-the-underdog element pervades these stories, which are full of solidarity, stolen moments of happiness, and risks, small and large, taken to escape boredom, paternalistic rules, and fates all too often prescribed.

Like Naples itself, Serao’s stories are remarkably crowded, packed with scores of characters. Each story essentially forms a series of crowd scenes, among them a high school classroom, an evening in a piazza along the seaside, a gathering around a young mother and her new baby, an office, a ceremony in a church, a mob escaping the volcano’s eruption. To draw her characters out from these crowds, Serao employs a technique mirrored by her use of light in some stories: in one, fireworks illuminate the characters, while in “The Novice” a spotlight on shore shines upon them one by one as they stand on a ship’s bridge during a festival in the bay. Similarly, like the sweep of a lighthouse torch, the narrative highlights individuals, relegates them to the background, then brings them around again such that the reader gets to know them through such intermittent flashes. After the first couple of stories, I made something of a game of trying to figure out who, when this sweeping light came to a halt, would be left as the “principal” character, if the stories could be said to have one at all.

A charming device linking four of the stories is a recurring character modeled on Serao herself. Caterina Borelli is depicted in a humorous and self-deprecating manner: a bit overweight, “nasty as a fat monkey,” “a shameless sleepyhead,” glasses slipping down her pug nose, given to too much reading: in short, a nerd. In “The State Telegraph Office (Women’s Section)” we learn of Caterina’s “inseparable” friend, Annanina Pescara, who complements Caterina in a way that could almost have served as a template for the two main characters of Ferrante’s Neapolitan books.

With depressing familiarity, this story depicts the bureaucratic work environment of young office women in exacting detail: how the women are distinguished in manner, affectation and ethnicity; the range of their attitudes towards work; what they wear and consider fashionable; how they manage job and family and love – or don’t; how the telegraph office functions, down to the brand names of equipment and the separate slots for telegrams for men and women. But what an ingenious setting for a literary work! Communications from all over Italy, the important and trivial life of the nation – banal business transactions, schmaltzy love notes, fervent political opinions, even a state decree to seize copies of a revolutionary magazine carrying a dangerous article (brilliantly given a universal quality by Serao’s narrator:  “’it began with the word ‘Until’ and ended with the words ‘in a pool of blood’”) - get relayed through a weary work force of girls whose lives are passing them by. Serao breaks her sketch into glimpses of variations in this drudgery, including a wasted Christmas eve of overtime, when the girls are “brought together to do nothing, in a big room in the semi-darkness, in front of a silent machine,” and the insanely busy day of a national election. Though Serao’s sympathies clearly lie with the lowest level employees, she spares a thought for their female director, who, in the privacy of her office, writes a melancholy holiday letter to a relative about her position in the big city. Serao has an acute awareness of these girls, their envy and compassion for one another; their humor; the coded language they use to relive the repetitious work; the risk to their jobs in conversing with operators in other cities, especially young men; the way in which even the door opening to the men’s section offers a momentary portal to another world. At the same time, Serao is starkly unsentimental regarding the future awaiting them; by age 40, most will be put out “on the street, old, dazed, unable to do anything else, in poor health and penniless.” 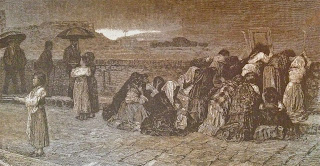 In the final story, “The Novice,” Serao’s indignation reaches its most acid level. Portraying a group of young women speculating about their possibilities for marriage, she hones her spotlight on Eva, who, having lost to another girl the young man she expected to wed, “marries” the church. The description of the girl’s entry into the cloister is nothing short of chilling, with all the ritual ornamentation of an actual marriage. Witnessing the ceremony (where Serao’s characters do not speak for themselves, their actions are often filtered through their peers), her friend Anna Doria is “stricken by a nervous fit of melancholy” as she watches

Eva’s renunciation of life, that separation from all things human, persons and feelings, that voluntary death of the Christian heart that abhors suicide, abhors the world, and turns only to God…[It] seemed to her the end of her own life; it seemed to her that she herself, Anna Doria, at the age of thirty-five, without affection, without a future, had no other choice but to go shut herself up in a convent.

Despite the grim realities of the stories in Unmarried Women, Serao’s compassion, indignation, and insistence on the verismo of the lives of women make for rich, moving portraits that affirm Colette’s assertion that “Among all forms of absurd courage, the courage of girls is outstanding.” Elena Ferrante’s own insistent account of the lives of girls and women in Naples, one that similarly catalogs their experiences and places faith in their “outstanding” courage, owes an enormous debt to Matilde Serao.

Posted by seraillon at 9:36 AM