Over the years the original outer ramparts had all disappeared, leaving only the main building to which had been added, at different times and in different styles, a series of later wings. The long rectangle of the main building was closed at each corner by massive stone towers which presumably had been added as a defence against the first cannon. Where the outer walls had stood, later Abadys, freed from the threat of siege, had planted flower-beds and lawns.

The last of the mediaeval defensive outworks, the tower over the gatehouse, had stood as late as the eighteenth century…[but] had to be demolished, leaving an empty space where once the great gatehouse had marked the entrance from the moat to the castle’s defended outer courts.

Here Count Denes Abady built a horseshoe-shaped forecourt, on the right of which he erected stables for thirty-two horses, while on the left there was a covered riding-school. In the apex of the horseshoe curve that joined these two buildings was an imposing gateway to the inner court through which could pass the largest carriages with all the parade of outriders and postillions. Over the doorway gigantic titans of carved stone lifted boulders menacingly as if they were always ready to hurl these down on anyone bold enough to venture that way; while towering above these giants was the figure of Atlas bearing the globe upon his back. On each side of the new great entrance were carriage-houses, tack-rooms, baking ovens to make enough bread for a hundred persons, a laundry furnished with a cauldron large enough to hold the dirty linen of a small town, and apartments for the equerries, footmen, coachmen, porters, grooms and huntsmen. The horseshoe court was built in rococo style between the years from 1747 and 1751, as an inscription over the door arch tells all those who pass below. The parapet, which half-hid the low curving roofs, was decorated on the outer side by large ornamental vases while on the inside, five metres apart, were placed statues of ancient gods and mythological figures, each with their traditional attributes and all writhing and twisting as if in ceaseless movement… 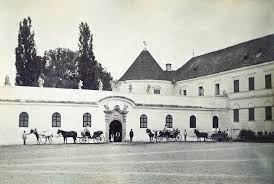 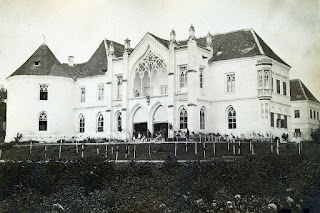 In my dreams of one day being able to visit Transylvania, I’d placed high on my list of places to visit the Bànffy Castle at Bonţida – “Denestornya” in the fictional world of the castle’s most famous resident, the great Transylvanian writer Miklòs Bànffy. This March, with three companions, I managed to get to Transylvania. We began in Cluj-Napoca, where we visited the Bànffy family’s palace in town and the grand old New York Hotel, once one of the great literary hubs of eastern Europe. The first we saw amid the chaos of an occupying temporary travel expo, and the second lay shrouded in scaffolding, its once ornate interior, from what we could see through dusty windows, now in a shocking state of (hopefully temporary) disrepair. Leaving the visit to Bonţida for our return to Cluj - the castle lies some 30 kilometers outside the city - we drove out of the city and followed roughly the same route taken by Patrick Leigh Fermor on the 1934 road trip he describes in Between the Woods and the Water, making a loop through a bare majority of the medieval towns referenced by the Saxon name for Transylvania, Siebenbürgen. Over narrow roads shared by big-rigs and horse-carts, we made our way across wide plains and rolling hills; up into snowy mountain forests; past castles, fortified churches, factories and communist-era apartment blocks; though Romanian, Hungarian, Saxon, Székely and Tsigane villages; along the aisles and up into the bell towers of austere and baroque churches; and deep into fantastical salt mines, 19thcentury cafés and contemporary Dadaist bars serving blood-thick wine.

Daily snow that had pursued us since our arrival finally pounced in Sibiu, an unexpectedly heavy overnight storm that delayed our return to Cluj until too late for the visit to Bonţida. I tried desperately to adopt the sanguine attitude taken by Fermor at his having to forego the magnificent art collection of Sibiu’s Brukenthal Palace (something we managed not to miss) and resigned myself to returning Bànffy castle to the shelf of dreams. But the morning’s clearing skies brought courage: we’d risk a run for Bonţida despite an extremely tight schedule for making our flight out. A quarter hour before the castle’s opening time, a kindly man standing by the gate, as though as he’d been awaiting our arrival, withdrew tickets from his pocket and let us in.

Though just short of 75 years have passed since war forced the Bànffy family to flee their castle and just over 100 since the period described by Miklòs Bànffy in his Transylvanian Trilogy, my first glimpse of “the Versailles of Transylvania” was like a punch to the gut. Emerging from the arched entrance-way at the bottom of the horseshoe-shaped building that had housed the property’s stables and riding school, I had a panorama of the estate. The overwhelming immediate impression was of a world obliterated. Crumbling stone walls flanked an enormous gap in one wing of the horseshoe. The exterior surface of the main building, formerly the Bànffy family’s living quarters, seemed flayed. Most of the windows gaped into voids; one lower sill disappeared into a charred black hole. Others had been filled in with what appeared to be concrete. Patches of snow lay across the grassy courtyard, mirrored overhead by passing white clouds of the departing snowstorm. The absence of any sign of life, aside from a dog sleeping curled up against the cold, gave the place an overpowering atmosphere of desolation and abandonment. 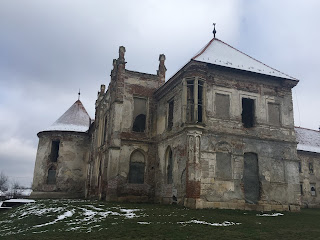 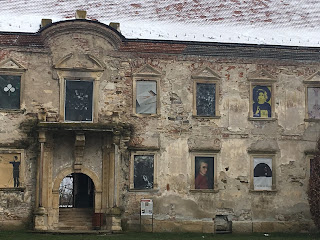 Upon closer inspection, the façade of the main building showed some recent attention. Enterprising artists had treated some of the windows as canvases, a disorienting juxtaposition with the decay. Up the building’s fractured and crumbling stone steps, we entered what had once been a grand entrance hall with a sweeping marble staircase. The stairs were gone. The landing had collapsed, as had an adjacent vaulted ceiling, half of its bricks having fallen and broken through the flooring, leaving a mountain of rubble. We wandered the downstairs rooms, each stripped to the bricks except for occasional bits of plaster etched with graffiti, the floors consisting of bare wood planks or exposed dirt. As though in defiance of this dilapidation, several contemporary art installations occupied the foyer, including dozens of bulbs suspended on long white cords hung from the ceiling and a large, decorative oriental fan that doubled as a barrier, blocking off a wing of the building. A few panels in Romanian, Hungarian and English provided information about the structure, but none of these signs of activity hinted at the life, as described by Bànffy, that had passed through these rooms during the glory days of the Austro-Hungarian Empire. It was as though nearly every trace of that world had been erased by intention and inattention, as in fact it had been. 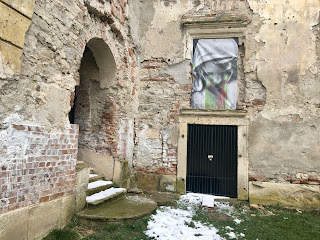 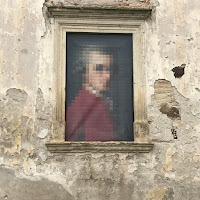 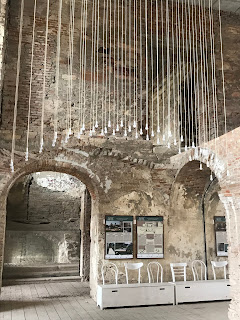 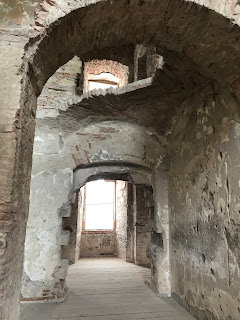 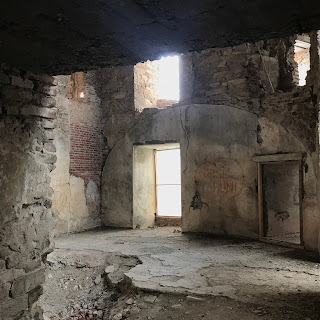 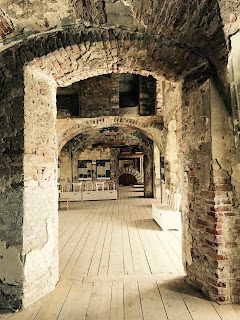 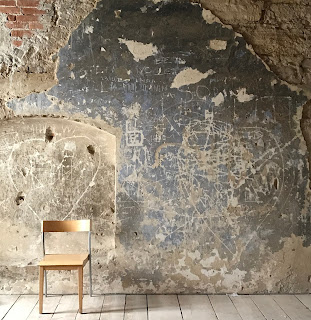 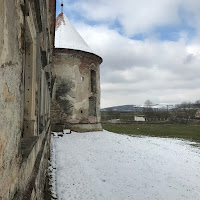 …the three young men retired to the library. This was a circular room in the tower above Balint’s own suite. All round the walls and even between the windows were fitted bookcases made of teak and fitted with doors of mirror-glass. These were full of all the volumes collected by generations of Abadys and, as they could not hold all the books, more cases had been built above them, also fitted with looking-glass doors. Above these, even more books were piled up, almost hiding the stone busts of the Seven Wise Men which had been placed there to look down on the baize-covered round table in the center of the room. 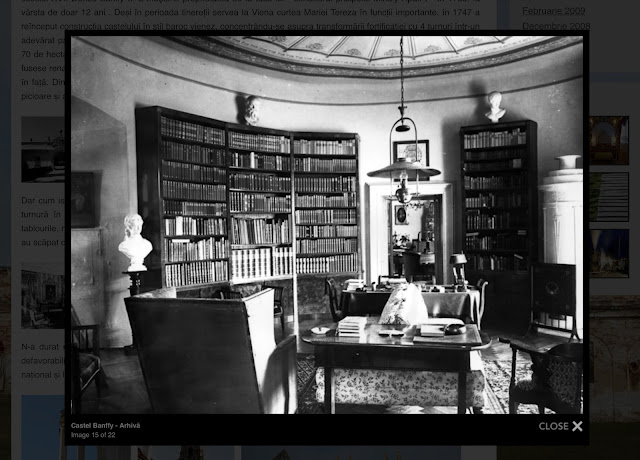 The earliest castle constructions at Bonţida appeared in the 12thcentury, and mention of the village itself reaches back a further 300 years. Over the ensuing centuries, structures have been built up and razed, moved along by successive waves of damage, including during the 18th century peasant revolt, the revolutions of 1848, and the political ravages of 20th century Europe, of which the castle, having absorbed so much, might almost be an emblem. In 1944, the retreating Nazis, in retaliation for Miklòs Bànffy’s work to forge an anti-fascist alliance, burned the main building, heavily damaging the structure and destroying its precious library. The interior furnishings were hauled away in 17 trucks to Germany, where they were promptly blown to bits by Allied bombing. Amateur attempts at restoration during the 1960’s did more harm than good, and the Ceausescu regime saw the estate used variously as a village pub, headquarters of an agricultural interest and grazing land for local shepherds. Near total neglect followed the collapse of communism in 1989; excepting the structural bones of the castle, what little remained, including statuary and carved bas-reliefs, was picked off by looters.

Even Versailles, however, might appear desolate and forgotten on a snowy morning in March absent visitors, and in fact my first impressions of Bànffy castle were deceiving. The Transylvania Trust, an NGO set up some 20 years ago to manage restoration, has renovated most of the building where Miklòs Bànffy last lived and has restored of all four of the castle’s conical towers, the buildings’ red tile roofs, and the outlying kitchen structure, which now contains an “Art Café.” In the stables, the vaulted ceilings are being rebuilt and the columns supporting them plastered and whitewashed. Such progress gives hope that the seemingly impossible task of restoring the family’s former living quarters may one day be accomplished. The Trust has creatively supplemented limited funding from the European Union through historically-themed “Bànffy Castle Days,” movie nights inside the ruins, conservation symposia and a prestigious architectural restoration training program that has graduated over 1,500 students. This July the estate will host the fourth annual “Electric Castle,” a five-day electronica music festival featuring name acts from across the world. 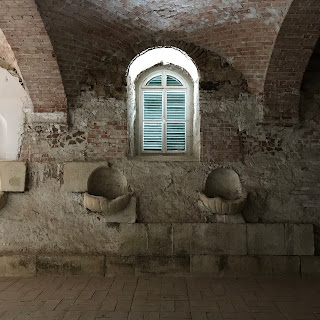 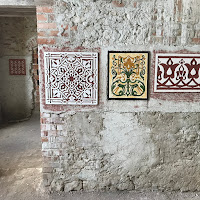 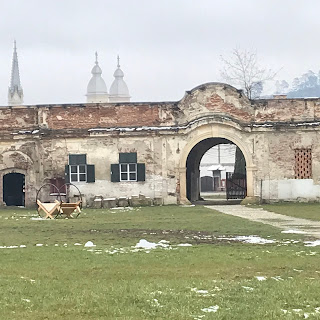 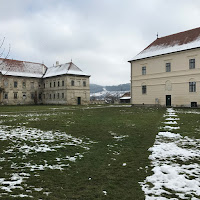 One wonders what Miklòs Bànffy would have made of Bonţida today. Even in a week in Transylvania one can grasp that some problems the author articulated so powerfully still remain – corruption, political short-sightedness, illegal logging of the region’s vast forests, tension over ethnic divisions (Hungarian books, including Bànffy’s, seemed all but absent from bookstores, and just weeks before our trip the Romanian Prime Minister had been forced out after suggesting that if the Székely hung up Székely Land flags he’d hang the Székely up with them). But the progressive Bànffy would no doubt would have been gratified to see so much attention given to revitalizing his castle. I’m not sure the music of Electric Castle would have been to his taste, but as a designer of political pageantry and theatre sets, and an encourager and collaborator with innovative artists of his day, including Béla Bartók, I think he would have appreciated the spectacle.

While our brief pilgrimage to Bànffy castle made for a poignant coda to the motifs of neglect and dissolution that run through Bànffy’s Transylvanian Trilogy, the recent attentions seemed to affirm an unexpected and defiant optimism, and to underscore the author’s long view of the human comedy. Bànffy castle might well survive to hear the last laugh.

So, with time, the great house grew and was transformed and spread itself with new shapes and new outlines that were swiftly clothed with the patina of years, so that when one looked at it from afar, from the valley of the Aranyos or from the hills even further away, the old castle with its long façades, cupola-capped towers and spreading wings and outbuildings, seemed to have sprung naturally from the promontory on which it stood, to have grown of itself from the clay below, unhelped by the touch of human hand. All around it, on the rising hills behind and in the spreading parkland in front, vast groves of trees, some standing on their own while others spread like great forests, seemed like soft green cushions on which the castle of Denestornya reclined at its ease, as if it had sat there for all eternity and could never have been otherwise. 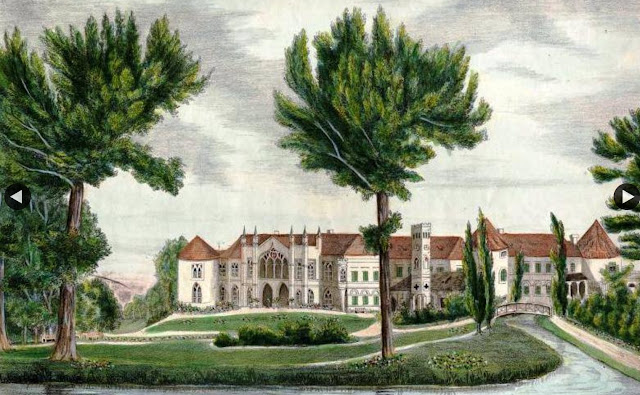 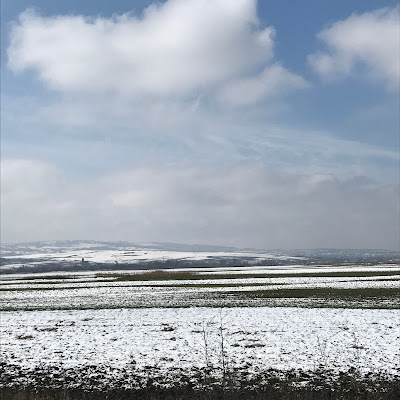 Below, a couple of videos from Electric Castle with some good views of the castle: