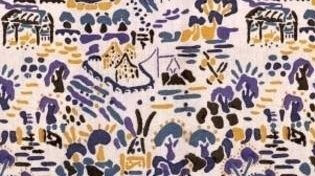 Dress pattern from 1930,
from the endpapers of Persephone Books' edition of High Wages

“Everything was covered in 1913; it was a discreet age” observes Jane Carter, the intrepid heroine of Dorothy Whipple’s lively and nimble novel High Wages (1930), set in a dress and drapery shop in Tidsley, a fictional town of the British Midlands. This early realist work by Whipple (1893-1966) seeks to uncover the age a bit, particularly with regard to the lives of young working women in the crucible of a small town setting where classes must inevitably intersect.

When we meet 17-year-old Jane it is 1912, and she has just spotted a notice in the window of Chadwick’s haberdashery. The job, as a live-in sales girl, offers a chance at independence and escape from a suffocating home. In Whipple’s rags-to-better-rags story, spanning ten years that form an understated parenthesis around World War I, Jane’s ingenuity, attunement to innovation and fundamental sense of justice take her from shop-girl drudgery to successful small business owner. Along the way, Jane must deal with an exploitative employer, leering London vendors, snooty upper crust matrons and the scions of their families, who assume women of Jane’s station exist solely for their amusement. Jane’s chief companions along this voyage include the faithful and enamored Wilfrid, a poet and worker at the free library; Jane’s dull, shop-girl roommate Maggie, who assumes Wilfrid to be her own boyfriend; the Chadwick’s poor cleaning girl, Lily; Noel, a wealthy young man who keeps crossing increasingly entwining paths with Jane; and a lonely but jovial client, Mrs. Briggs, who herself has crossed from the lower class to the upper by way of marriage and who bankrolls Jane’s business and takes her on a lark to Blackpool - a welcome breath of air and light in this claustrophobic novel. I don't think I'm giving too much away here; I found High Wages’ chief interest to lie outside of its somewhat conventional plot.

One might imagine an edition of the novel illustrated with the pieces of clothing that parade through it as though on an invisible catwalk, but Whipple is even more attuned to the businessof fashion. She positions her work at the cusp of a small revolution in capitalist mercantilism, which was just beginning to place a high value on marketing. For clothiers, this meant attention to window displays and interior aesthetics as well as the necessity of adapting to the new phenomenon of ready-mades. For customers, such changes spurred the development of modern consumerism. Some of Whipple’s keenest observations limn the manner in which her provincial customers, whose days rarely offer more than household chores, card games and gossip, needlessly buy fashionable attire in order to fill the vacuum of their lives, a prescient exploration of a world in which material goods and desire were becoming increasingly and deliberately entangled.

Much of High Wages is devoted to uncovering the social and economic lives of such provincial women. As a child Jane “often wished the front of a row of houses would fall down and allow her to see what was going on in all the rooms at once,” and her abiding interest in others provides intimate glimpses into these conditions. Though she manages to bob up and down across class lines, her sympathies clearly lie with the downtrodden. She essentially rescues Mrs. Briggs from domestic isolation and the condescension with which those born into the upper-class treat this interloper. Jane’s generosity of spirit and sensitivity to human weakness extends even with those incapable or unwilling to accept it, such as when she tries to assuage Maggie, blindly convinced Jane is trying to steal away Wilfrid, and in scenes with Lily, who fairly worships Jane but is unable to leave an abusive relationship with a drunk. Even Jane’s mounting intolerance of Tidsley’s insularity (“You were so known. If, in absence of mind, you walked in to a lamp-post, the fishmonger knew”) is tempered by an affection for such “an ugly place, a small place, a dirty place,” which happens to be home: “it also meant a great deal to her. She knew it in all its aspects.” The indignities Jane faces in such an environment, though, accumulate into an advocacy for herself and the women around her, leading her to rebel against class injustices, patriarchal attitudes, and - in a transgressive relationship – even marriage, a confining institution in which she sees unhappy people remaining simply because “its’s so hideous getting out.”

Whipple pulls off a remarkable balancing act between the sensitivity she expresses through Jane and the critical eye she casts about her. She can bring a devastating, nearly Caroline Blackwood level of acerbic humor to her descriptions of her small town, small-minded characters:

Mr. and Mrs. Chadwick went to church on Sunday morning; Mr. Chadwick in his morning-coat, his two scallops of hair showing like the wings of a bird that had got imprisoned under his bowler hat; Mrs. Chadwick in a toque like a humble relation of Mrs. Greenwood’s; she carried before her a round muff like a hedgehog, and another strip of hedgehog bristled round her flat, creased face.

Maggie flounced along in a frock printed all over with large flowers; she looked like something upholstered, and ate caramels without pause.

Customers were often strange creatures; so incredibly confidential. Miss Parsons, for instance, disclosing her life’s sorrow – the hairs on her legs. She had refused an offer of marriage because of these hispid limbs. All her life she was condemned to virginity because of them. Rather prim, thought Jane. She wondered if Guy de Maupassant would have made a tale out of it. A woman resisting temptation with inexplicable virtue; the reasons to be revealed in the last line with dramatic effect: ‘Ses jambes étaient couvertes de poils.’

One of the most surprising aspects of High Wagesis the degree to which it engages another Midlands author, Arnold Bennett, to whose work Whipple’s novel could be considered a companion volume. Bennett is everywhere in High Wages. Early in the book, Jane is seen reading The Old Wives’ Tale, and Whipple even names a minor character after Bennett. Bennett shows up again in the architectural conception of Chadwick’s shop, which closely echoes that of the shop in The Old Wives’ Tale, and in Jane’s observations on the industry of the area. A description of a train trip Jane takes to Manchester could have come right out of Anne of the Five Towns:

She could see the occupants of the first-class carriages playing cards, or fallen into unlovely sleep. They did well to avert their eyes from the landscape they had made. They had made it; but they could not, like God, look and see that it was good. Monstrous slag-heaps, like ranges in a burnt-out hell; stretches of waste land rubbed bare into the gritty earth; parallel rows of back-to-back dwellings; great blocks of mill buildings, the chimneys belching smoke as thick and black as eternal night itself; upstanding skeletons of wheels and pulleys. Mills and mines; mills and mines all the way to Manchester, and the brick, the stone, the grass, the very air deadened down to a general drab by the insidious filter of soot…But Jane, Lancashire born and bred, did not find it depressing. It was no feeble, trickling ugliness, but a strong, salient hideousness that was almost exhilarating.

Taking Bennett’s similarly conflictual expressions of distaste and affection for the Midlands, Whipple fleshes them out in a literary treatment that seems both homage and riposte. At one low point, Jane adopts Bennett’s advice to read Marcus Aurelius, whose aphorisms fall significantly short of addressing the array of problems she faces, and Whipple’s novel suggests that while the author admired Bennett’s work, she may also have seen it as skirting the very real issues that working women in the region faced.

I found a great deal more to recommend High Wages, and I’ll just note a few of these. For one thing, there’s a huge amount of literature in this novel. In the first chapters, Jane is smitten by the word when Wilfrid recites a poem. She readily accepts his offer to supply her with books, devouring Bennett of course, but also works by H. G. Wells, Algernon Swinburne, John Galsworthy and others of the age. She reads Shakespeare, Jane Austen’s Emmaand Marguerite Audoux’s “perfect thing” Marie Claire (a book which, not coincidentally, was first published in English with an introduction by Bennett). Jane also references the literary tastes of her well-to-do clients, who rarely aspire higher than Marie Corelli or fashion magazines.

The language in High Wages is also tremendously entertaining (at least to a Yank reader). An automobile is a “mangle.” Home-made cakes at a party include “rock-buns, jumbles, parkin.” Jane refers to a large nose as having “bubukles and welks.”  A woman’s hat is a  “fascinator” (a term new to me but apparently still in use). Some memorable nomenclature also comes from the Cockney accent of Lily, who calls Jane’s perfume “odyclone,” and from Jane’s clients: “Mrs. Thomas called underclothes ‘neathies.’ ‘Neathies!’ said Jane. ‘Lord!’”

While High Wages is primarily focused on women, commerce and provincialism, it’s also very much concerned with World War I and its aftermath. Whipple shows us Tidsley’s young men departing for battle, the women volunteering at local hospitals, hints of deprivation. Mrs. Chadwick, for example, sneaks into the shop-girls’ butter allocations, using a razor blade to pare off slices to add flavor to her own insipid soups. Wilfrid, who reluctantly goes off to war and returns not quite the same person, is almost emblematic of the whole conflict, and Jane’s own attitude towards the war is summed up in a violent thought she has that the only way to stop the killing “was for more men, for every man to go out and kill.” Ultimately, the war lends High Wages a dark cast; despite the work’s humor and sparkle, it is not particularly optimistic.

But small matter – the engaging High Wages serves as a great introduction to yet another member of that remarkable group of terrific mid-century female British comic writers. Kudos to Persephone Books for bringing it back into circulation.


I learned of the Persephone Readathon at the Dwell in Possibility blog just after finishing High Wages; please check out posts on other Persephone Press books appearing there now through September 30, 2018