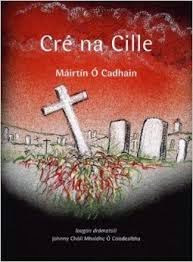 There’s a strain of literature that aims to be morally uplifting and instructive, a primer for improvement of self and others. Irish writer Maírtin Ó Cadhain’s blackly funny Cré na Cille, or The Dirty Dust, most assuredly does not belong to it.

Ó Cadhain’s 1949 “novel,” long praised but little read due its having been written in Irish vernacular, has appeared at last in English translation. The wait has been worthwhile. The Dirty Dust is a striking piece of mid-20th century literature, one that can fit comfortably among the great works of the period. All comfort ends there, though, as The Dirty Dust poses several challenges. Even rendered into English its language contains a plethora of vernacular words and neologisms. Furthermore, the work consists entirely of dialogue, with no explicit indication of speaker. And the speakers in The Dirty Dust are legion, because they are also dead. The setting is “The Graveyard.” The time is “For Ever.”

The Dirty Dust is hardly the first work to feature a cast of the dead; one thinks of Edgar Lee Masters’ Spoon River Anthology, Thornton Wilder’s Our Town, even Dante’s The Divine Comedy. But rather than speaking from beyond the grave, the characters in The Dirty Dust speak from directly within it. For all the buzzing inactivity that goes on in this graveyard of a small Connemara town, there’s little in the way of metaphysics; these dead are dead, in their dead bodies, in their wooden coffins. Their voices speak from the separate cavities into which they’ve been laid, although in a darkly comic turn Ó Cadhain reveals - to his characters’ double mortification - that inept or hasty undertakers have sometimes put bodies in the wrong graves or piled them atop one another to save space. Eternity in Dante’s inferno could hardly be worse than in Ó Cadhain’s cemetery, as here the newly dead, expecting to have passed on to a better world, instead find themselves in a static hell of gossip and chatter among the villagers who’ve gone before them. If one imagines one’s worst-ever holiday family meal stuck on eternal loop, it might be something like this.

There isn’t any chance to get away here, or to talk about culture…they are always talking about small stupid insignificant stuff here…cards, horses, booze, violence…Nobody has a snowball’s chance in hell of developing their intellect here…

Their voices overlap and interrupt. They emerge suddenly and, just as suddenly, fall quiet. At times they seem far off, at times nearby. Plot scarcely exists. Much of the sense of the story lies between the lines, unspoken. Gradually patterns and persons begin to emerge from this cacophony, usually recognizable through fixed, monotonous obsessions with particular subjects - not infrequently astonishment at having died: at failed kidneys, a heart having given out, a knife thrust through the ribs. But there are also conflicts over football, money, property, betrayals of word and of love. The same class and power differences, recriminations and enmities that existed above ground have migrated below it.

Caitriona Paudeen, the unpleasant central “character” of the novel, speaks first. Just buried, she wonders whether she’s been put in the Pound graveyard or only the Ten Shilling. Her self-interrogation has barely begun when she begins to hear, with a shock, nearby voices, then suddenly a chaotic chorus.

- Christ’s cross protect me! - Am I alive of dead? Are the people here alive or dead? They are all rabbiting on exactly the same way as they were above the ground! I thought that when I died that I could rest in peace, that I wouldn’t have to work, or worry about the house, or the weather, that I would be able to relax…But why all this racket in the dirty dust?

The small ambit of Caitriona’s ruminations and her graveyard companions’ reactions to them reveal her bitter family situation. A despised sister Nell still lives in the village. Another sister, Baba, has long been away in America, holding a will that Caitrionia, whose death has done nothing to halt her avarice, obsessively hopes will accrue entirely to her son Patrick, a ne’er do well pulling a string of bad marriages. Bitter and vituperative towards all, Caitriona gets as bad as she gives, as her fellow dead voice their own resentments and grievances against her. Part of the comedy of The Dirty Dust comes from Caitriona’s discovery at nearly every turn that her view of herself is not shared by those around her, each new revelation making her so sputteringly incensed that she wants to “burst.”

Caitriona’s neighbors, her mother-in-law, Nell’s husband, the postman, the pub owner, a shopkeeper, the town thief, a murderer and his victim whose conflicting political views continue on into death now that they’ve found themselves buried side-by-side – these are but a few of the cemetery’s dead, their ranks swelling with each new arrival. There’s the town’s former schoolmaster, who entertains his fellow corpses once a week by reading a romantic novelette (Two Men and a Powder Puff, among other tawdry titles). A former student exploits the opportunity of an eternal captive audience to recite her multiplication tables to her teacher to show that she’s finally mastered them (she has not). A French voice inscrutably inserts itself among the Irish until we learn that it’s a pilot who, having crashed into the sea and been buried among the villagers, mutters continually in French about the uncomprehending Irish: “Ils m’ennuient.” Standing out from the others, a disembodied, intermittent “Trumpet of the Graveyard,” begins most of the novel’s ten chapters by making lyrical pronouncements concerning the inevitability and universality of death, providing momentary relief from the relentless prattle. And of course, to ramp down The Dirty Dust into deeper depths, there is an unnamed writer, deceased “suddenly from an attack of writer’s cramp.” He picks impatiently at the “hackneyed” phrases of his neighbor in the tomb, an illiterate traditional storyteller, urging him to blow the “dirty froth” off his stories and get to the pint beneath, and occasionally offering dubious pronouncements about writing:

Topics of conversation in The Dirty Dust, infused with a near constant and often acridly funny mediation on death, possess a strong Irish flavor, with references to the IRA’s struggles, political leaders such as Éamon de Valera, and unmistakably Irish aspects of life such as wakes and pubs. With less overt Irishness, Ó Cadhain’s work might resemble a play by Samuel Beckett: characters gabbing in the dark, isolated in their tombs like Nell and Nagg in their dustbins in Endgame, discovering things that happened when they were alive to which they weren’t privy and anticipating the next new burial to learn about their own funerals, the dispensation of wills and other matters that have continued on without them.

The language in Alan Titley’s translation burns along the pages. Anyone looking for a catalog of insults need look no further, as the opprobrium bandied about among the dead surpasses anything Mère and Père Ubu might have hurled at one another: “clap of crap,” “fly’s fart;” “poxy shitmonkey,” “pouncy microphallus,” “perfect pustule of the plebian pricks.” “I’m screaming at you for the last hour and you take no notice of me no more than if I was a slobber of frog spawn,” complains one.  What the ungrateful dead wish upon one another and upon the living is equally scathing: “May he get the death rattle of Slimwaist Big Bum! The decrepit diseases of the Hag of Beare!...His knees explode! His rump redden with rubenescence! Be lanced by lice!”

Ó Cadhain’s linguistic versatility and humor manage to keep 300 pages of this from seeming as eternal as it is for the dead. Beneath the dirt, few demonstrate much self-awareness, nor - despite underground efforts to hold an election and organize a rotary club - any more movement and change than during the largely self-absorbed, egoistic lives they apparently led prior to interment. One constantly yearns for the dead to surmount their petty concerns, discover something meaningful to talk about, shut up and realize that they’re dead. But their concerns rarely go beyond wanting to know if a cross of Connemara marble has been erected over their tombs.

Just beyond the dusty halo of grumbling graveyard conversation, though, is a hint of greater events. Despite the explicit “For Ever” indicated as temporal setting, a discernible timeframe emerges around all the talk. Through the graveyard’s self-proclaimed first arrival, a young soldier lost to the First World War, one ascertains that Caitriona’s burial takes place approximately 1939. Other references suggest a scope for the conversation paralleling World War II. The voices refer frequently to the “new” conflict up above; recent arrivals argue over Hitler; the young solider must repeatedly be corrected that “The War Between the Two Powers” hasn’t simply continued.

Curiously, much of the war news filtering into the dirt and dust seems distilled through the writer, who in addition to fixedly trying to formulate a short story - “The Sun Set,” “Another Sunset,” “Sundown,” “The Setting Sun” or a like variation - is proud of having written a collection of poetry entitled, provocatively, “The Yellow Stars.”  He serves as a target for reactionary outrage at the “disgusting lowdown mind” that could write such “Joycean gunge” and at having insulted Irish saint Colm Cille (several voices urge wretched tortures upon him). But the complexity of his role is deepened during idle gossip about the washing of a corpse covered in tattoos of swastikas, which seems to belong to the writer. Is his the voice that’s been interjecting praise of Hitler? Regardless, small-mindedness as regards the monstrousness of the war is conveyed in Caitriona’s assertion that the graveyard has become “worse than those places the Frenchie was yacking on about the other day: Belsen, Buchenwald, and Dachau.”

In this palpable presence of the war’s horror – and most evidently in the novel’s coastal small town setting, narrative style, and voices from the dead – The Dirty Dust may claim as a close literary cousin Dylan Thomas’ “play for voices,” Under Milk Wood, which, though it appeared in print after The Dirty Dust, originated as a radio play broadcast in 1945 (Cré na Cille itself has been performed as a radio play, as well as turned into stage and film versions). But little of the intensely magical lyricism of Thomas’ play or of his rapturous affection for the beauty of his small town can be found among Ó Cadhain’s noisy, bickering dead. If Thomas’ intention in Under Milk Wood was to reveal, despite the war’s enormity, the evanescent beauty and preciousness of life, Ó Cadhain’s novel feels like a searing riposte, a portrayal of death as providing no respite, redemption or absolution. It’s as though O Cadhain has taken Under Milk Wood’s little village of Llareggub and, refusing the subtlety of Thomas’ joke, turned the town’s letters backwards to proclaim openly: “Bugger all!”

And when, towards the end of The Dirty Dust, a neighbor gently admonishes Caitriona regarding her endlessly vicious and petty fixations, the words resonate like a condemnation of all that is mean, small and insular. “God will not forgive us,” warns Caitriona’s neighbor, perhaps a bit belatedly seeing where they find themselves. But given the interminable dirt dished among Ó Cadhain’s jabbering dead, no less mired in trivialities in death than in life, one would be hard put to argue.
Posted by seraillon at 11:41 AM