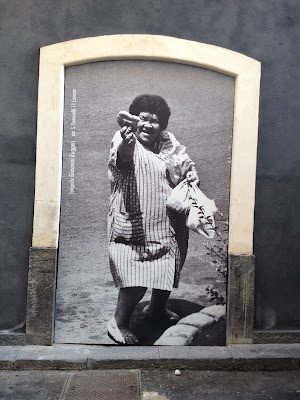 I’m going to try to write around the conceit at the center of contemporary Sicilian writer Roberto Alajmo’s 2003 novel Cuore di Madre - Un Cœur de mère in the French translation I read, or A Mother’s Heart as I’ll refer to it here. Even though I’m normally inclined to reveal spoilers for novels not yet translated into English, dammit, in this one so much is constructed around the central conflict, which holds such a limited universe of possible resolutions, that I feel I’d be giving too much away. For those of you nonetheless willing to stick around, I’ll try to keep your interest by adding that A Mother’s Heart is one of the funniest novels I’ve read in a long time, as black a comedy as black comedies come, one that probably could have been written nowhere but in Sicily. Its peculiar blend of laugh-out-loud humor with the appalling way a child gets treated in the story might not sit well, for example, with some sensitive American tastes. The novel also contains many specifically Sicilian resonances; in fact, Alajmo’s dark comedy takes aim at what might be Southern Italy’s most crucial social fulcrum: the relationship of a son with his mother. While such territory has been mined by other Sicilian writers, even for comic effect – Vitaliano Brancati comes to mind – Alajmo elevates (correction: descends) the mother/son relationship to serve as an elaborate and devastating metaphor for the status quo of modern Sicily.

One barely gets a whiff of the direction Alajmo’s story will take from its opening pages, which begin by dissecting the possible reasons one Cosimo Tumminia, proprietor of a bicycle repair shop in the dusty village of Calcara south of Palermo, has no clients. Perhaps Cosimo’s social isolation stems from a botched repair job, perhaps from innumerable small events that have accumulated into intractable negative gossip, maybe from a vengefulness born out of some old antipathy, its origins lost to time. Whatever the reason, the villagers keep their distance, and callow youths make rude gestures each time they pass Cosimo’s shop, although they do so “mechanically, like those things one does because one does, without demanding why one does them.”

Cosimo seems not to mind much, or even to notice. Passive, incurious, something of a big lug who lives alone in a house in the countryside, he has few interests. Having long ago failed in his few attempts with women, he keeps pornographic magazines under his bed and visits – albeit rarely – an aging prostitute on the edge of town. The “pillars on which Cosimo’s culture rests” consist almost entirely of the stories, jokes and puzzles included in each issue of Games and Crossword Puzzles Weekly, a habitual form of recreation in which he’s indulged for some twenty years. On occasion, he supplements this thrilling diversion by watching whatever happens to be on television or by listening to a radio show on which long-distance truckers call in to report on their locations.

The single other significant element in this vacuous life is Cosimo’s mother, whom he visits in town every day, largely for the purposes of being attentively reminded of his failings and supplied meals he can take home, which his mother prepares for him with relentless maternal insistence.

But now another feature has come into Cosimo’s circumscribed world, a tremendous change he’s scarcely capable of acknowledging as a more than a blip in his routine. This obligation he’s unable to refuse, one foisted upon him by a handful of local Mafiosi who’ve seen in his social disconnection the qualities perfectly suited for a patsy in a criminal scheme of which the details – though not the hugely un-ignorable central fact of it – remain obscure to Cosimo. The role assigned to him, compromising everything in his quotidian existence, unexpectedly stretches from a promised “few days” to an indeterminate and increasingly untenable period, with no guarantee that those who’ve placed him in this situation will ever return to get him out of it.

Much of the comedy in A Mother’s Heart stems from Cosimo’s bumbling inadequacy and incompetence in handling his new responsibility. Much of the rest - predictably - stems from his inability to keep his overbearing mother from getting involved. Though relationships between mothers and sons feature frequently in Italian literature, I can’t think of a work in which such a relationship has been so expertly milked for horrific comic effect. Alajmo is deft at creating little comic touches, for example, in using what passes on television as a repeated, humorous counterpoint to what’s happening in Cosimo’s life, or when he reveals the mother’s pride in a set of progressively-sized food containers into which she daily and dutifully shifts a progressively-shrinking amount of leftovers, or when he zooms in on her obsessiveness over the precise point at which a dish is ready to eat. I suspect that more than a few Sicilian sons may have found this book exceedingly discomfiting; even so, they probably still couldn’t wait to get home for mama’s cooking. Like Andrea Camilleri’s Inspector Montalbano mysteries, Alajmo’s novel gleefully indulges in Sicilian food, as Cosimo’s mother prepares dish after dish: meatballs in tomato sauce; pasta with sardines, anchovies or tuna, with and without garlic; fried eggplant; and above all brociolone. I’ll let you look up a recipe for yourselves, but should you happen to have a Sicilian relation coming to dinner I’d advise care in choosing among the variations. Disputes over familial differences in preparing Sicilian specialties can turn deadly.

When Cosimo casually suggests that his mother’s brociolone tastes better the day after it’s been cooked, he missteps into a typically impossible exchange with her:

“Why? You didn’t find it good just now?”
“No, for pity’s sake, it’s very good.”
“What about it didn’t you like? Did the potatoes seem too undercooked?”
“No, never in your life!”
“Well, then why did you say you didn’t like it?”
“Who, me, what did I say?”
“That you didn’t like it. Just now, you said it.”
“But when?”
His mother placed the casserole on the table, a sign that she wanted her hands free in order to get to the bottom of things.
“You take me for an imbecile? Just now, you said it.”
“I said that when I ate it the next day it seemed better…”
“So, today’s…”
“What do they have to do with one another? I was speaking in general. Today’s will be even better tomorrow, but it’s already good now.”
“But that the dish would be better when reheated tomorrow you couldn’t yet know, so when you said that it was good, you’d perceived, in fact, that it wasn’t as good as usual. You don’t have to bother my head about it.”

If such exchanges characterize the mother/son relationship in matters so inconsequential, one can imagine their amplification when it comes to the serious circumstances into which Cosimo has fallen.

Alajmo hews closely and leisurely to details, painting a richly textured portrait of the situation. For example at the beginning, in describing the three hypotheses regarding Cosimo’s ostracism, the third-person narrator takes up an entire four pages, a pace so protracted as to test the reader’s patience. Similarly, a description of the contents of the Games and Crossword Puzzles Weekly stretches over multiple pages. But like the tortoise catching up with the hare, slow and steady wins the race, and Alajmo thus creates an almost giddy tension, such that when the problem reaches critical mass, the narrator’s insistence on unhurriedly relating granular details drags the reader through the full measure of the awfulness involved. This combines with the novel’s great black humor to push the reader into a deliriously appalled state. Rarely have I encountered a novel that uses its pacing so effectively to heighten an intended effect.

A Mother’s Heart would be enjoyable if it only aimed for laughs, but Alajmo’s humor pokes pointedly into the particular Sicilian disease of Mafia influence on daily life as well as into the universal ways ordinary people can inertly submit to domination by becoming trapped into routine, acquiescent, and by extension, complicit. One emerges from Alajmo’s clever novel with a tragic sense of his having pierced into the core of a state of things capable of starving off hope for future generations, one far too deeply and menacingly woven into the fabric of Sicilian life. It’ll take more than a mother’s heart to unravel it – more than this mother’s heart, anyway.

A huge thanks to JLS for having recommended Roberto Alajmo’s books. At the moment, only one of his works appears to be available in English, his delightful non-fiction “anti-travel guide” Palermo, worth reading even if only to get a flavor of Alajmo’s singular humor and great talent.

Above: Photograph of a photograph by photographer Giovanni Ruggeri installed in a doorway in Catania, Sicily, 2014.