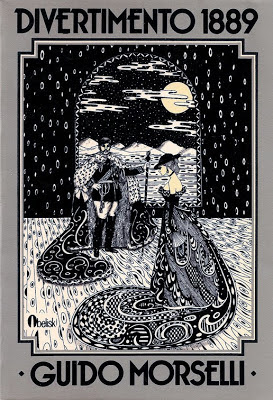 In an afterward to Divertimento 1889 (published 1975), Italian author Guido Morselli transparently defines his short novel: “A simple story with no special significance, and with nothing to teach…a flight from reality among the phantoms of the Belle Époque? I would not deny it.” But Morselli’s deceptive modesty here is but one reason the author remained largely in the shadows until after his suicide in 1973, after which publication of his works brought recognition that Italy had lost one of its finest writers. As even the title of this novella suggests, Divertimento 1889 appears to be escapist fiction. This is not entirely true. Rather, it’s escapist fiction that thematically examines the very idea of escape, written with a pregnant, tensile evanescence, like a shining soap bubble maintaining itself longer than one would think possible, and hinting at ineffable presentiments beyond its blithe, fairy-tale-like gaiety.

As raw material for his tale, Morselli borrows from the case of King Umberto 1, Savoy ruler of Italy from 1878 to his assassination in 1900, “An irrelevant figure, as incapable of doing harm as he was of doing good, as neutral and colourless as the seal embossed on state notepaper.” As the novel opens, the King sits stuck in his office in Monza, besieged, like any common bureaucrat, by tedious duties and “far too many papers, as always,” conscious already of his approaching end:

No mysterious allusions, no dark presentiments. He is far too sure of his fate. Some fine dramatic death, all over in a flash? No chance. His destiny is very different, and far worse. This futile slavish job of his, condemned to trail the length and breadth of his ungrateful land  - dusty, disjointed Italy - with no power and no responsibilities and yet pursued everywhere by papers and couriers, as though it all depended on him, as though he could alter a thing.

Morselli, who wrote an entire allohistorical novel about World War I, toys here with history on a smaller scale, inventing an episode missing from the actual accounts of Umberto’s reign: the king, on a whim, trades his mountains of paper for the mountains of Switzerland, and goes off on a secret escapade.

Adopting the pseudonym Count Filiberto di Moriana and taking along a small coterie of trusted advisors, Umberto decamps to the Hotel Adler in Groeschenen. The sale of one of the King’s landholdings to Frau Von Goltz of nearby Wassen,  aunt to a member of the King’s entourage, will serve as partial excuse for his presence. “Hunting,” whereabouts unknown, will serve as partial excuse for his absence.

As the King prepares his adventure, a breeze of independence wafts through his life: “All these preliminaries, every one of these preparations and precautions, was his doing and his alone – the King’s. Unaccustomed to such freedom of action, to exercising such ingenuity, he felt an inordinate pride in his achievement.” On the train ride over, the heady inexperience of such liberty makes him nearly ill, but, arriving and settling in, he senses an invigorating delight in being able to behave like a normal person:

Handing over your money, pocketing the change, behaving like other people do so enviably every day…He bought stamps, and postcards which he would never send, chocolate he would never eat because it was against doctor’s orders, a half-bottle of Kirsch which he presented to Mancuso, exactly like a real-life tourist who has to count every Swiss franc he spends.

The next day, walking alone in the alpine countryside, he stumbles upon Frau Von Goltz’s home and is invited in, causing the King to muse retrospectively, as though expressing the underlying theme from the many fables of royalty mingling secretly in society, “I discovered life.”

A “simple story with no special significance” - yet problems arise. As the reader can anticipate, the perils for a monarch of traveling incognito are legion, particularly in Switzerland, “the spies’ paradise.” These complications – among others a hitch in the land sale, the threat of an ostentatious visit by the German Kaiser, indiscreet dalliances, an inquisitive vacationing journalist – crowd in to give the story new tensions and accentuate the fragile glory of the King’s caprice. But balancing these tensions - and one of Divertimento 1889’s great attractions - is the way Morselli colors in its simple outlines with rich and often humorous glimpses of the Belle Époque. Digressions on the “impeccable Helvetian efficiency” of Swiss railroads, for example, convey the era’s infatuation with novelty and technology:

For then travel by train was a thrill which the railways companies fostered by devising ingenious circuitous routes, spectacular ascents and descents and contortions, fruit of a technology full of fantasy which, like the opera-house, prized set design and trompe-l’oeil effects purely for their own sakes.

Similar asides illuminate other aspects of Belle Époque life, such as the interiors of grand hotels; the period patterns and colors and textures of materials; vintages of great champagnes and marks of fine cigars; the splendid and imposing beauty of the Alps and the haplessness of foreign tourists who visit them:

A variety of spectacles was available to the village’s summer guests. There was the to-ing and fro-ing of the more dauntless among them, Anglo-Saxon for the most part, setting off to scale the glaciers with a tinkling arsenal of crampons, ice-picks, and Alpenstocks, amid a picturesque retinue of guides and muleteers and porters, and as like as not returning with broken bones and half frozen to death.

Morselli turns a similarly unsparing, winking eye on Italy itself:

The French (or French-Swiss, or Belgians) were bandying impressions of Italy. They had been struck by the sheer scale of everything in Italy. The variety of police forces (three of them, rivals yet not competitors, even four according to some calculations), the number of killings (Italians murder each other without cease, and preferably without motive), the hordes of unemployed day-laborers in village squares, the immense and unremitting uproar thanks to which the foreign visitor in Florence, in Genoa, in Milan, might just as well not waste his time trying to grab any sleep, day or night. The prodigious quantity of litter and empty bottles enhancing the natural beauty of the landscape, on the beaches, in the fields, all over the hills. Further peculiarities: if a train arrives at a station less than twenty minutes behind schedule; if a letter reaches its destination within three days of being posted, all who are party to the miracle cross themselves ‘just like we do when a calf is born with two heads’.

These amusing snapshots of a time past, besides being entertaining, underscore the novella’s surprisingly moving themes around mortality, obscurity, the nature of freedom, one’s relationship with history. Having escaped the confines of high office, however temporarily, the King cannot escape being reminded of his approaching end, not least by the print near his bed in the Hotel Adler, the Stufenaltar des Mannes, depicting the stages of life from infancy to decrepitude. Part of the charm and poignancy of Divertimento 1889, however, comes from its subversive reminder that death is the most democratic of institutions and from its linking the King’s fate to the imminent demise of an entire era, a world on the verge of disappearing, swept up by “the frenetic tempo of modern life, particularly as embodied in its all-consuming technology, such as the telegraph (and soon we shall have the telephone), electric lighting, the giddy speed of the railway train.” The “March of Progress” represents “the twilight hour” for monarchies, “the long evening shadows….beginning to close in…the climacteric.” As the King recognizes, a greater threat to him than radicalism or socialism is anachronism.

In the last line of the book’s afterword, Morselli counsels readers to “take this little tale in the spirit of its title. One person at least, I who wrote it, was diverted.” Make that two people, at least; in fact, I went out of my mind over this book. Beyond simple diversion, Divertimento 1889 offers a near perfect narrative of sparkling and unique charm and an extraordinary belle echappée that confers a lingering, nagging weightiness long after one has closed the book’s covers. We’ve been escaping too into Morselli’s glittering, romanticized past, within which there’s a foreboding reminder for all of us, whether functionaries or kings, of the ultimate impossibility of escape, of the number of days “enjoyed and those still to enjoy…shrinking fast, becoming ever fewer and more precious, to be uncorked and savoured one by one, minute by minute.”