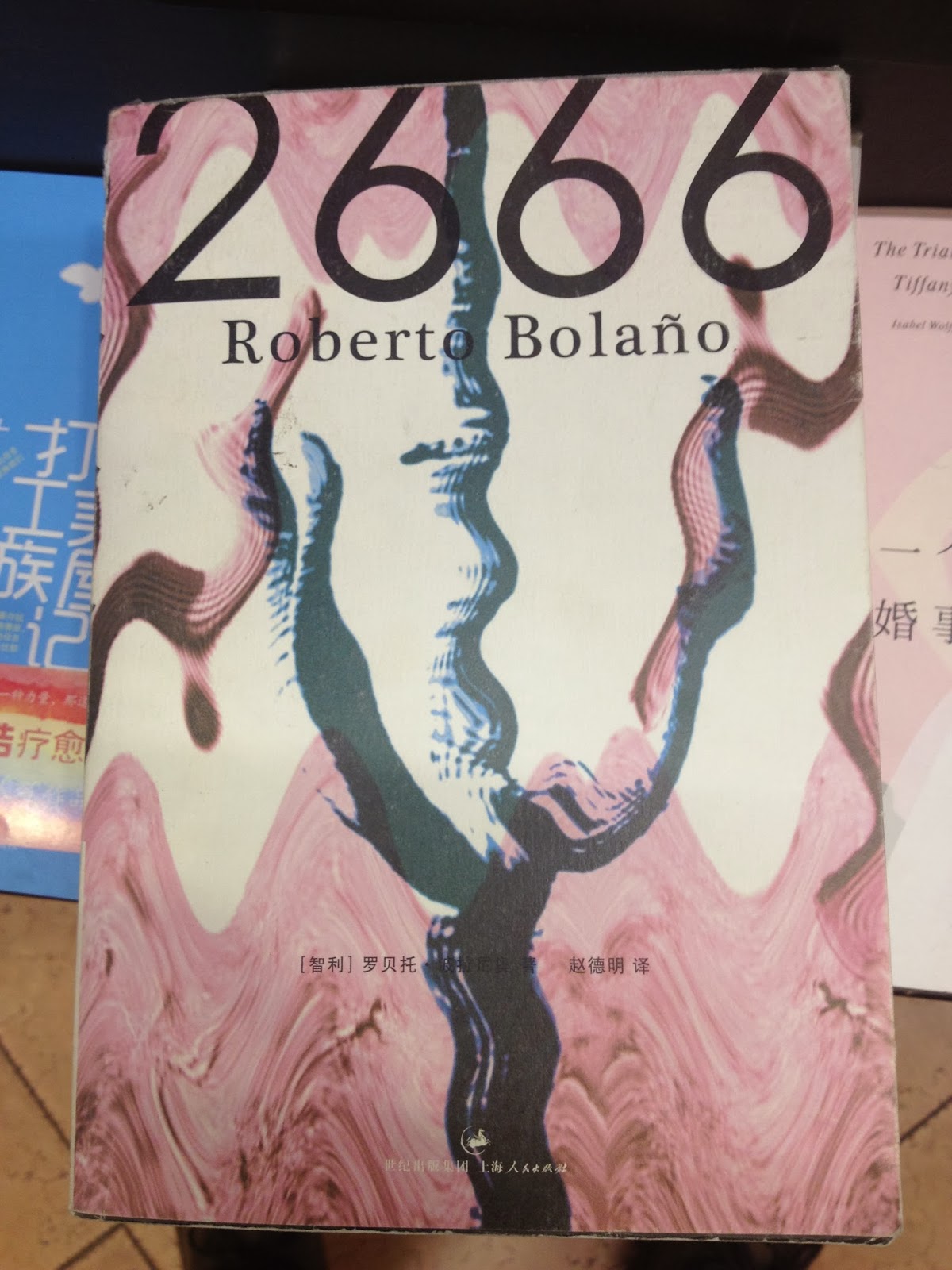 An edition of 2666 in Chinese, one of the few major languages
that doesn't appear in "The Part About the Critics"

“The Part About the Critics,” the first of the five parts that make up Roberto Bolaño’s sprawling 898-page work, 2666, may seem familiar to anyone who’s read his earlier novel, The Savage Detectives. Three men and a woman set out to track down an elusive, almost mythological writer, and their search, peripatetic and wayward, and ringed by suggestions of violence, eventually takes them into the Sonoran desert of northern Mexico. Only in 2666, this gang of four differs from that of the earlier book almost to the point of parody. All four are academics, for one thing, and their search is punctuated by literary conferences, papers, readings and re-readings, and translations – lots of translations, one assumes, since the four come from England (Liz Norton), France (Jean-Claude Pelletier), Spain (Manuel Espinoza) and Italy (Piero Morini) and their common link – the writer Benno von Archimboldi – is German. Their lives also entwine romantically and sexually, imbued with a near constant, adolescent anxiety about where they stand in relation to one another that occupies nearly as much of their attention as their quest for every shred of information about the mysterious Archimboldi.

Benno von Archimboldi’s existence, like that of the poet Cesária Tinajero in The Savage Detectives, is entirely constructed by unreliable sightings and contradictory clues, most of which – not unlike Olive Oyl’s song in Robert Altman’s Popeye in which all she can think of to describe Bluto is that he’s “large” – tell us little about Archimboldi other than that he’s “tall.” The four critics “could read [Archimboldi]. They could study him, they could pick him apart, but they couldn’t laugh or be sad with him, partly because Archimboldi was always far away, partly because the deeper they went into his work, the more it devoured its explorers.”  The writer is, in a word, missing; so, at least for the readers of 2666, is his writing. For all the attention the four critics lavish on Archimboldi’s work, the only glimpse Bolaño provides of it is some book titles. Omission is a frequent tool in Bolaño’s kit, but here the entire oeuvre of a writer, one in line for the Nobel Prize no less, stays just off stage, invisible to Bolaño’s readers (though the crumbs Bolaño throws us, these twenty-odd titles, allow 2666 to make a rather outsized contribution to the Invisible Library).

This omission is not as great a loss as one might think, since Bolaño himself helps fill in the gaps by employing these four academics as vehicles for a delirious array of anecdotes, digressions, literary references, and miscellaneous sparks and tatters of text, writing that remains deeply compelling despite offering little that is cohesive or conclusive. Strung upon the plot line of the academics and their search for Archimboldi, Bolaño’s flights of writing signal one another across the text, sometimes coalescing into intimations, suggestions, pieces of a puzzle or puzzles that lead to no solution. Bolaño also begins, quite early in the novel (page 43 in my edition), to carefully drop into his story hints of horrors to come that accrue insidiously, creating an increasing atmosphere of dread. I wish to spoil nothing for those who haven’t read the book, but take it as assumed that those approaching it know that the center of gravity of 2666 is the series of horrific murders of hundreds of women perpetrated in and around Ciudad Juarez, Mexico beginning around 1993.

The academics’ passing interest in the snippets of information they hear about the murders is repeatedly displaced by the consuming interest they show in Archimboldi.  Morini, the first to hear about them, fantasizes about traveling with the reporter whose article he has read, but “an hour later he’d already forgotten the matter completely.” Towards the end of “The Part About the Critics,” Pelletier and Espinoza hazily recall, from being drunk the night before, a Mexican boy telling them about the scale of the serial killings – over two hundred women, perhaps more – but the matter gets intellectualized by the hung-over Espinoza, who’s equally interested in the boy’s having read Archimboldi in French without really knowing the language. In the bathroom to puke, he’s too obtuse to connect his illness with anything more than having had too much to drink, wondering, “…why should I have been upset?”

Yet while these murders remain on the periphery of 2666 for most of this first part, violence does not. Two significant episodes of abject violence (among a host of other more minor episodes and allusions) feature prominently in “The Part About the Critics.” The first is directed at a Pakistani taxi driver in London who has had the audacity to make some disapproving comments about the propriety of Liz Norton’s behavior as a single woman out with two men, the generally mild-mannered Pelletier and Espinoza, who in response suddenly transform into enraged, out-of-control thugs, beating and kicking the cab driver and leaving him by the side of the road (and stealing his taxi too). The penalty they pay? Liz Norton suggests a brief hiatus in their seeing one another.

The second prominent display of violence – and here we enter fully into Bolaño territory - appears as part of an artwork, one of several conceptual art pieces featured in 2666. Liz Norton recounts the story of a painter friend, Edwin Johns, who, before ending up in a sanitarium in Switzerland, had severed his own hand and placed it dangling within an assemblage/painting (“an ellipsis of self-portraits, a spiral of self-portraits”) displayed in a gallery. Unbeknownst to Norton, the three other academics visit Johns, who whispers to Morini a mysterious response to the question as to why Johns had cut off his own hand, a silent exchange (another omission) ostensibly linked to Morini’s temporary disappearance. The other critics cannot locate him, and their initial concern gives way to a kind of shrugged-off assumption that he’s okay and will turn up. Though we’re not privy to what Johns has told Morini or why it may have resulted in Morini’s dropping out of sight, Morini later suggests to Norton that Johns may have cut off his hand for money. But again, the suggestion is just that, providing no solid conclusion, like many elements in 2666 offering just another turn of the screw, another hint aimed at trying to gain some understanding of violence and barbarity, but left fluttering in the wind, awaiting, later in the novel, further echoes of it to appear.

The generally calm and safe world of literary academia – one of conferences, papers, insular debates about intimate details of writers and their works – may seem far removed from the monstrousness in the world.  But that distance is an illusion. As Bolano suggests in “The Part About the Critics,” violence is but a hair’s breadth away. It may erupt from within. Or, by a simple tug on a thread – in this case the rumored appearance of Benno von Archimboldi in the northern desert of Mexico – one can be drawn into the maelstrom. “The Part About the Critics,” which began with the academic’s innocent obsession with a mysterious writer, ends, by a curious trick of geometry, with Bolaño having physically moved us to the epicenter of barbaric atrocity, the murders of women that will be so central to 2666.

This post is written as part of the 2666 group read hosted by Richard at Caravana de recuerdos.
Posted by seraillon at 1:39 PM