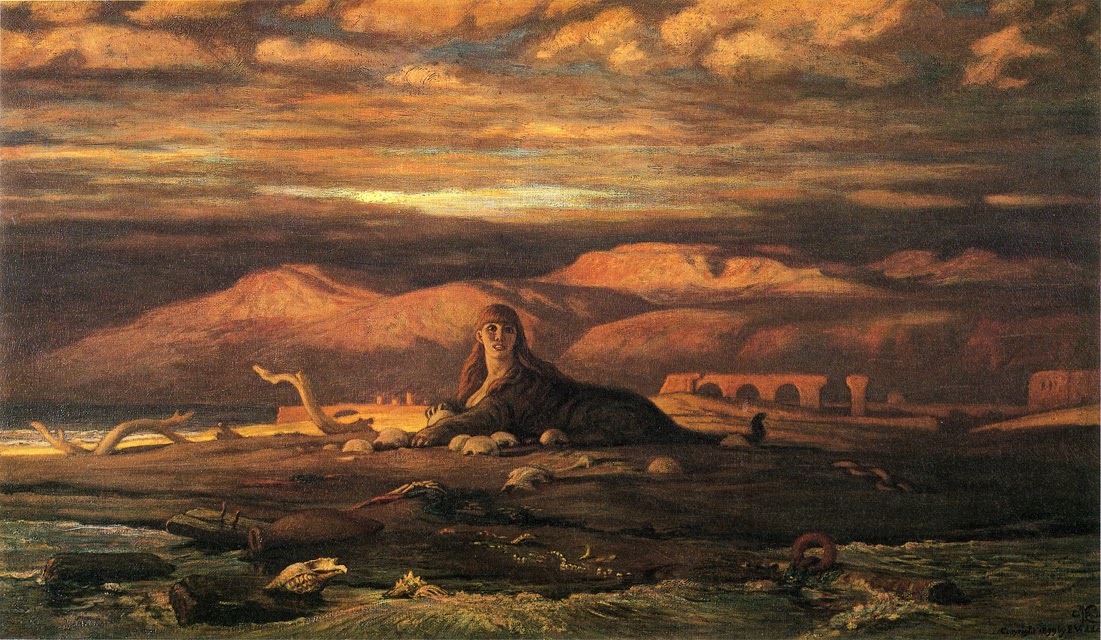 Elihu Vedder, The Sphinx of the Seashore (1879-80), Fine Arts Museums of San Francisco

Last year, the Times Flow Stemmed blog posted a terrific list of books about the desert to which others added nominations. I’ve made a project of reading these works, but as I keep learning of other desert books, my goal recedes like (if I may be so boldly original) a desert mirage. The latest interloper, a work I’d be thrilled to put high on my own such list, is French writer Pierre Loti’s plainly entitled The Desert (Le Désert, 1895), which, with fortuitous timing, came to my attention mere hours before I headed to the Mojave for a long weekend. Rarely has a book aligned so magnificently with the setting in which I read it.

The Desert recounts, in diary form, Loti’s month-long journey from Cairo to Jerusalem through the Sinai and Petraean deserts in the company of two European companions and twenty or so Bedouin. Translator Jay Paul Minn notes that Loti took the trip both to indulge his obsession with Islam and, hoping to find inspiration in Jerusalem, in an effort to reconcile his atheism with his mother’s Christianity. Rejecting the most commonly traveled routes, Loti opted for the more forbidding, dangerous passage through the Petraean, at the time beleaguered by internecine clashes and conflicts between Arabs and Turks.

The first pages of The Desert gripped me as few books have. Loti quickly plunges the reader into landscape and lightscape, evoking the desert’s emptiness and silence with impressionism turned to full burn:

…the desert does not disappoint, even here at this threshold where it is just beginning to appear. Its immensity overwhelms everything, enlarges everything, and in its presence the wickedness of human beings is forgotten.

And how quickly we have been taken prisoner by it! How suddenly have we been wrapped in silence and solitude!... Nobody and nothing anymore, as the desolate night descended…And suddenly all around us there was infinite emptiness, the desert at twilight, swept by a steady cold wind: the desert of a neutral and dead color, spreading under a darker sky that seemed to fall and crush it out to the edges of the horizon all around.

Turning to nearly any page of The Desert, one finds rapturous appreciations of color, light, space, the weirdly sculpted geology created by harsh, elemental forces, unexpected desert flowers, snakes and gazelles, lush oases, distant snow-capped peaks, the “permanent and ageless stars.” Loti’s descriptions come saturated in color; I suspect the book would still be fascinating were one to conserve only the passages involving pink. There is something pure about Loti’s encounter, a human presence so aesthetically and spiritually overwhelmed by mesmerizing light and shadow, by the vast, shifting sands, that for much of the book one would scarcely know other people were about. Loti’s attention towards his own unmediated confrontation with the desert masks the reality of his essentially traveling as a tourist. The Bedouin supply team so essential to Loti’s undertaking most noticeably appear when, almost comically, they streak past Loti and his companions each day at lunch in order to set up the evening camp, shouting greetings that briefly unzip the silence of the desert until they again ride out of sight.

Loti knows that he’s putting the human presence secondary, and to be fair, he does offer more than a few nods towards the people he meets. He details his frustrating negotiations with a functionary at Aqaba and the boredom of the outpost’s Turkish soldiers, sketches encounters with desert chieftains, Russian pilgrims and barefoot Bedouin children, and, upon arrival in Gaza, summarizes its place in history with a succinct power that replaces associations from today’s headlines with a tragic sense of the city’s rich, irretrievable past. Most captivating, though, is Loti’s account of the astonishing monastery of Saint Catherine high on Mount Sinai, where he spent a forced sojourn (due to snow!). Before reading Loti’s account, I knew nothing of this nearly inaccessible, ancient edifice, its monks going about their solemn daily tasks as monks have done there for 1,500 years, its vaults hiding innumerable priceless relics and manuscripts. Through Loti’s hermetic account, Saint Catherine’s comes across as remote and unexpected a religious refuge as the mystical mountain monastery featured as the culmination of Peter Brook’s hypnotic film, Meetings With Remarkable Men.

The Desert is a sui generis work of desert writing, its sumptuously romantic reveling in the desert’s colors, textures, and spiritual inducements (should anyone need to explain the concept of romanticism, Loti’s book could be an invaluable teaching tool) drifting occasionally towards the decadent and surreal. One scene exemplifying this aspect involves the shooting of an owl, which the Europeans, aggrieved over having dispatched such a magnificent bird simply for sport, decide to bury in “a little trench in the sand”:

When the owl is in the hole on its back, with its wings hugging its body like a monk’s cloak, it still stares at us obstinately, with an astonished expression of reproach that cuts us to the quick.
On the poor yellow eyes which will never be seen again, on the so well-groomed and beautiful feathers that will soon rot, we throw sand. Then we roll a heavy rock over to assure peace for this tomb…

Give in to Loti’s romanticism, and the staring yellow eyes become as potent a symbol as Ozymandias, left to gaze eternally out upon the lone and level sands. But slip out of Loti’s magic spell for an instant, and the scene could take on an almost laughable quality of kitsch.

Still, I can’t get that owl out of my head. A hundred years after its decay into nothingness, I envision it as an enduring presence, a fixed, disembodied stare somewhere out in the desert vastness. It seems to encapsulate the essence of Loti’s small book, his capturing, in limpid, crystalline prose, the unforgettable drama of seeing the desert, of having one’s eyes opened to its immensity, timelessness and power over one’s perceptions. For those of a romantic temperament (I’m not naming names), Loti’s book seduces and enthralls, a treasure to be luxuriated in knowing full well - and holding in abeyance one’s awareness - that it has little to do with the realities of the desert’s human face, and everything to do with the impressions that can bewitch one there and induce a profound, transfixing awe.

Loti’s book thus stands apart from, say, Wilfred Thesiger’s Arabian Sands, a divergent account of travel with Arab tribes that Times Flow Stemmed pegged as perhaps the greatest of desert books. If one seeks to grasp the palpable danger and grit of desert travel and the fundamental courage of the peoples who manage to live there, it’s doubtful one could do better. Thesiger might have cringed at Loti’s glancing, tourist’s appreciation of the desert tribes, but I suspect he would have identified with the spell the desert had cast. For Loti, perhaps better than any writer I have read, including Thesiger, conveys the experience of being absolutely smitten, humbled and transformed by the desert.

As I hiked that weekend through the Mojave,[i] everything seemed filtered through Loti’s gaze: the metamorphosis of light, of pinks and lavenders, yellows and grays, ochers and violets; an unexpected petroglyph left by a long vanished people; a chill wind sweeping a canyon as snow clouds closed upon distant peaks; glowing, faraway ridges and empty, interminable plains slowly engulfed by darkness. If, in rhapsodizing about the desert, Loti had expected to convey a profound, contagious appreciation, he’d succeeded spectacularly. An overwhelming sense of solitude and an “illusion of being united with universal permanence and time” took hold. Did it matter that some 20 million people lived within a few hours’ drive? I couldn’t think about that.


[i] A rare moment of advocacy for something other than books on this blog: Several of the areas I explored fall within the proposed Sand to Snow National Monument. Write your representatives to help ensure preservation of this stunningly majestic area where the Mojave and Sonoran deserts transition to the summits of Southern California’s highest range. UPDATE February 12, 2016. Sand to Snow (along with two other large areas of Mojave desert) has just been designated as a National Monumnet by President Barack Obama, a tremendous action that will ensure protection of these astonishing desert landscapes.

Posted by seraillon at 2:29 PM