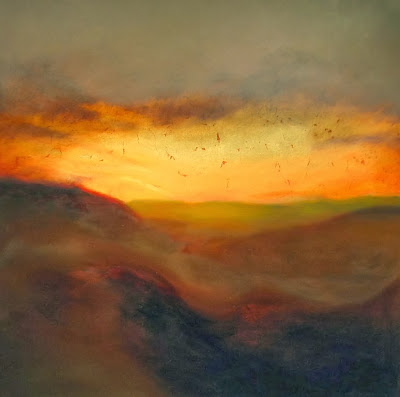 I’d thought I was prepared for John C. Van Dyke’s The Desert. I’d heard of it for years, and it had come up in two works I’d just read. Jay Paul Minn, translator of Pierre Loti’s book of the same title published in 1895, a mere six years before Van Dyke’s work appeared, had noted the strong influence of Loti on Van Dyke. Reyner Banham, in Scenes in America Deserta, claimed Van Dyke’s book as the desert book he most revered and devoted a section of his own to it. But the fervor of Van Dyke’s vision and the exquisite language of this extraordinary prose poem still took me by surprise.

Loti traveled the Sinai and Petraen; Van Dyke roamed the Sonoran, Colorado and Mojave deserts. Different deserts, different books, yet a similar monomania bubbles up out of the confines of both writers’ more-or-less conventionally structured narratives.  But following Loti’s indulgent, romantic, neophyte’s infatuation, Van Dyke's ardor ascends to levels undreamed of by Loti. He comes off as something of a madman-poet-scientist-sage, with a keen knowledge of and nearly fanatical devotion to the region he explored for three years, alone save for a pony and dog. “The desert has gone a-begging for a word of praise these many years. It never had a sacred poet; it has in me only a lover,” writes Van Dyke. Loti may be awed before the silence and light show, but Van Dyke, a former professor of art history who seems more like some ancient being born from the sands, craves both the show’s enchantment and knowledge of its magic’s backstage mechanisms.

Many desert scientists can and do go into endless technical detail about the subjects of their studies, but Van Dyke (who claimed his book was an aesthetic rather than scientific appreciation) merges the scientist’s powers of observation with the vision of the artist, then combines these qualities with the zeal of a prophet. What strikes one most about The Desert is the passionate poeticism of its prose, so fiercely tenacious that one can barely find a place for shade in the burning flow of its narrative. Picking out seductive passages is easy, as they appear on nearly every page:

The dunes are always rhythmical and flowing in their forms, and for color the desert has nothing that surpasses them. In the early morning, before the sun is up, they are air blue, reflecting the sky overhead; at noon they are pale lines of dazzling orange-colored light, waving and undulating in the heated air; at sunset they are often flooded with a rose or mauve color; under a blue moonlight they shine white as icebergs in the northern seas…

…the moon – the misshapen orange-hued desert moon. How large it looks! And how it warms the sky, and silvers the edges of the mountain peaks, and spreads its wide light across the sands! Up, up it rises, losing something of its orange and gaining something in symmetry. In a few hours it is high in the heavens and has a great aureole of color about it. Look at the ring for a moment and you will see all the spectrum colors arranged in order. Pale hues they are but they are all there. Rainbows by day and rainbows by night! Radiant circles of colored light – not one but many. Arches above arches – not two or three but five solar bows in the sky at one time! What strange tales come out of the wilderness! But how much stranger, how much more weird and extraordinary the things that actually happen in this desert land.

Such selective quoting, though, fails to convey the grandeur of Van Dyke’s fugues and flights of thought, nearly Blakean in their vision, the sermon of a desert saint to the winds and sands and stars. A profligacy with the exclamation point, that most expendable of all punctuation marks, may initially annoy, but one quickly gets swept up by Van Dyke’s exuberance. This is the salt and light sermon on the mount of desert writing: a manifesto extolling the desert’s fierce, contradictory beauty:

…the waste places of the earth, the barren deserts, the tracts forsaken of men and given over to loneliness, have a peculiar attraction of their own. The weird solitude, the great silence, the grim desolation, are the very things with which every desert wanderer eventually falls in love. You think that very strange perhaps? Well, the beauty of the ugly was sometime a paradox, but do-day people admit its truth; and the grandeur of the desolate is just as paradoxical, yet the desert gives it proof.

Van Dyke structures his book into a dozen chapters, the titles of which, excepting those dedicated to flora and fauna, tend towards the abstract. Beginning with the first, “The Approach,” they become increasingly cerebral, reaching their apogee in three central chapters that overlap in dealing with the atmosphere. “Light, Air and Color” would seem to take care of the subject, but is followed by “Desert Sky and Clouds,” then by the almost mystical “Illusions,” which might well stand on its own as a great text of phenomenology. Here Van Dyke poetically and scientifically plunges into tricks of light produced by reflection and refraction, by heat and distortion: persons, wagons, animals, whole cities hovering in the air, and of course, the common mirage of water:

…its illusiveness adds to, rather than detracts from, its beauty. Rose-colored dreams are always delightful; and the mirage is only a dream…only one of nature’s veilings which she puts on or off capriciously. But again its loveliness is not the less when its uncertain, fleeting character is revealed. It is one of the desert’s most charming features because of its strange light and its softly glowing opaline color.

The later chapters devoted to plant and animal life lose this ardent edge a bit, though Van Dyke still acquits himself as a master of simile and metaphor. An antelope’s legs “seem to open and shut like the blades of a pocket knife.” A mule-deer’s feet “seem to strike rubber instead of stone; for he bounds like a ball.” But that Van Dyke is most at home amid the uncertain metamorphosis of color and light is evident when, in a late chapter on geology, he leaves the earth behind and again gets deliriously lost in a glorious haze, only still later to lose himself in the dome of the sky. It’s notable that the only time he makes the reader the least bit aware of himself as a living body is in the first pages, where he climbs a rise to gain a better view; most everywhere else in the book, he might as well be a disembodied perceptive apparatus.

The cadence of Van Dyke’s prose is occasionally – and deliberately – Biblical (“All, all to dust again; and no man knoweth the why thereof”). His narrative is also shot through with images of war, conflict, and death (“…at every step there is the suggestion of the fierce, the defiant, the defensive…"). Van Dyke reserves his most scorching language for man, the “one great enemy,” against whom Nature – “all of it good, all of it purposeful, all of it wonderful, all of it beautiful” – will undoubtedly prevail. Reyner Banham critiques Van Dyke’s vision of the desert as something that should remain pure, untrammeled by human beings (other than Van Dyke, presumably). But despite this misanthropic puritanism, it’s difficult not to fall under Van Dyke’s spell enough to concur with his assertion that “The deserts should never be reclaimed. They are the breathing spaces of the west and should be preserved forever.” Were he alive today to see the sprawl of Phoenix or the exponentially growing resort communities of the Coachella Valley, he would be mortified. An early passage describing desecrations of landscape across America by captains of industry provides as succinct and devastating a summary of American environmental destruction as I’ve encountered. After listening to Van Dyke’s testimony begging for a “proper angle of vision” to admire the desert’s mesmerizing qualities, contemplating a similar fate for the desert could turn anyone into an environmentalist.

But whether or not one adheres to Van Dyke’s purity of vision, his book stands as a brilliant, engulfing piece of prose, as fervent an appreciation of landscape as one is likely to find.
Posted by seraillon at 2:20 PM