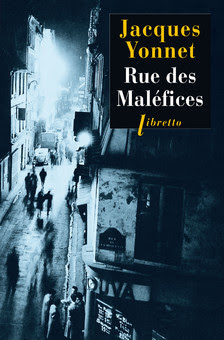 One doesn’t have to spend a lot of time in Paris to sense that it holds many mysteries, but the more time one spends there, the more such mysteries begin to manifest themselves: occult symbols in the architecture, centuries-old esoteric societies, marabouts and mystics, a whole secret city. After a quarter century of frequent visits there, I was flabbergasted that I’d never before encountered Jacques Yonnet’s stunning 1954 book, Rue des Maléfices: chronique secrète d’une ville – or, as the title is somewhat more sensationally translated into English (perhaps by the marketing department) Paris Noir: The Secret History of a City[i]. It’s easily the most unusual book I’ve read about Paris and one of the few that has completely jolted me out of any smugness about my own familiarity with the place. No, says Rue des Maléfices, try as you might, you’re not ever really going to know this city. But the door Yonnet’s book opens upon Paris throws an illuminating light nonetheless, permitting unforgettable glimpses of the city’s most shadowy, ensorcelled corners, “into the mysterious fluxes that pulse in the darkest secrecy of the City’s veins.”

I hasten to point out that Rue des Maléfices is not, strictly speaking, a book about occult Paris. I’d probably have skipped it had it been, and had it not come to me through fittingly mysterious circumstances (my own visitation from the past, a vanished Paris acquaintance from 15 years ago who by sheer coincidence showed up again this year living in the apartment directly above me in San Francisco). Rather, Rue des Maléfices stands at the unusual intersection of a personal obsession - a passionate interest “in everything related to Paris as it used to be, and whatever survives of its old traditions” – and the impersonal Second World War, during which Yonnet, a journalist and “technical education supply teacher, curious by nature,” worked clandestinely with the Resistance, relaying radio messages to help coordinate bombing runs on German positions.  Traveling within a fairly circumscribed area of occupied Paris between the Left Bank poles of Place Maubert and “La Mouffe,” Yonnet’s orbits roughly parallel Paris’ “lost” river, the Bièvre (now a mostly subterranean stream covered over by the city’s growth and all but invisible except to the most inquisitive seekers), a unifying element that emphasizes the hidden past lurking beneath the flickering present and lends a depth and gravitational pull to Yonnet’s concentrated portrait of Paris under the Occupation. Many writers might have built their book around their daring exploits in the Resistance, but Yonnet often treats his dangerous work as a self-evident obligation and as almost incidental (at least until its hazards interrupt the narrative with cold violence), and the war as something of an impertinent interference in his excavations of Paris’ past and depictions of its present.

Recording in charcoal as well as in prose (a few sketches are included in my French edition of the book, along with photographs by Yonnet’s close friend Robert Doisneau), Yonnet displays an insatiable curiosity about the characters with whom he interacts in the bars, cafes, flophouses, and secret corners of the city: fellow members of the Maquis, gangsters, gypsies, informers, poets, prostitutes, immigrants, spies, madmen and others from the lower depths: “a gang of Bohemians of whom [he was] in some sense the key player and prime mover,” given his genuine interest in their stories and his consequent ability to win their confidence. Through anecdote, dialogue and historical accounts - and no small amount of humor as well as horror - Yonnet conveys his portraits in a narrative that possesses the drive and suspense of a thriller.

Yonnet’s interests range widely, from insightful explorations of the city’s history to endlessly fascinating casual observations concerning, among other things, origins of idiomatic expressions, locations of crimes and of events almost mythological in their power to enchant, bits of Parisian history spread over a millennium, incidents of bizarre psychiatric phenomena of the sort one might find in an Oliver Sacks book, opinions on art and craft, a digression on tattoos, and atmospheric evocations of Occupation life in the bars and cafes of the area. Among the more memorable portraits is that of Keep On Dancin’, a ruthless but gregarious and heroic gangster on the lam from the Nazis and the police, who, when not brutalizing his betrayers, genially shares with Yonnet his own profound obsession with Paris’ buried mysteries.

Though Rue des Maléfices manifests a particular interest in the mystical, even cabalistic side of Paris, Yonnet is careful to maintain a skeptical, empirical mien. His book thus comes off not as an account by a believer pre-disposed to the sensational and bizarre, but as that of a sharp observer who has simply left a door open to the possibility of events beyond comprehension - “fantastic but fantastic on a human scale.” Rue des Maléfices is filled with stories of coincidence, the supernatural, and improbable, sometimes inexplicable phenomena: a watchmaker who makes watches that run backwards for nobles determined to remain young; the apparent transformation of a human into a fox; an elderly gypsy who with a look stops an attacking dog, leaving it trembling and sickening unto death; an exploit that involves Yonnet and a distinguished British professor on a furtive series of inquiries that put them in touch with a disgraced priest who performs exorcisms.

An openness to the mysterious also serves partly as a bulwark against the Occupation itself. While Yonnet observes that, “these days,” a cheap employment of the occult is, after all, useful to megalomaniacs - “It requires only the slightest sense of mystification to get anyone acclaimed by any crowd” – his turn towards the mystical acts as another sort of resistance, a conviction that the monstrosity of the Nazi presence is another aberration doomed to failure, especially up against the immense weight of history in a city that has seen as much  as Paris.

Part of the mesmerizing power of Rue des Maléfices stems from this long view, its timeless determination to excavate Paris’ past while a World War is raging. Yonnet’s attention to the mystical is in part a consequence of the derangement of the times, a recognition that “the most innocent words, the most harmless gestures in certain places and at certain times acquire an unwonted importance and weight, and have repercussions that far exceed what was intended,” and in part a more personal response given the necessity of navigating potentially fatal encounters by relying on instinct and intuition. It’s hardly surprising that Yonnet would place stock in such metaphysics, exhibited, for example, through his “sixth sense” hunches that invariably prove right about the dangers of the missions he undertakes. At one point he notes that “just as a war between men is not a human-scale phenomenon, danger that assumes a human form and a human quality is much more related to time and place than to its extremely unwitting vehicles,” and agrees with one of his compatriots that  “…the study of paranormal phenomena ought to be pursued in depth, especially during the times when serious upheavals such as the present war were afflicting the planet.”

Like many of the bars and bistrots Yonnet mentions, the “Rue des Maléfices” of the title actually exists, and in an inquiry typical of Yonnet’s persistent and meticulous investigatory skill, he digs through centuries – and multiple transmutations of the street’s name – to arrive at the street’s tenebrous origins. Tourists who today explore what is now the narrow Rue Xavier Privas, with its cheap Greek restaurants and souvenir vendors, might tread more lightly if they were aware of the strange and lurid events that have unfolded there over hundreds of years. But Rue des Maléfices is perhaps not a book for tourists; one’s rewards in reading it are magnified by a familiarity with the city, not to mention an openness to the city’s innumerable secrets. Yonnet says as much in closing, when he wishes he could one day “follow on the heels of an attentive reader,” who may find among “all the ‘keys’ scattered through these pages…the key to their own front door.” You may be that reader. Stranger things have happened.

[i] The English translation is by Christine Donougher and published by Dedalus Books. Another French version of the book goes under the anodyne title Enchantements of Paris.

Posted by seraillon at 2:15 PM