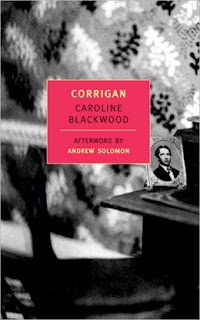 One of the more rewarding corners of 20th century literature must surely be that occupied by darkly comic British women writers, among whom there seems to be a superfluity of talent: Beryl Bainbridge, Muriel Spark, Barbara Comyns, Angela Carter, Barbara Pym, Elizabeth Taylor – I am leaving out scores. Wielding an especially sharp knife for carving out (and up) her subjects is the Irish/English writer Caroline Blackwood.

Corrigan, Blackwood’s last, longest novel, features a few well-tread topics - the difficulties of marriage, mother-daughter conflicts, the upstairs/downstairs dynamics of class - but also elements seldom encountered: a main character in a wheelchair; a self-aware fashion model; an inherent sense of fair play, with the emphasis on that last word; and copiously flowing champagne. It also contains a clever plot that made me wonder if Georges Polti, author of the classic The Thirty-Six Dramatic Situations, had ever encountered a writer like Caroline Blackwood. Those few of his formulations that might apply here – Fatal Imprudence? Self-Sacrifice for an Ideal? Crimes of Love? – undergo such subversion in Blackwood’s hands as to be scarcely recognizable. This is the third Blackwood novel I’ve read, after Great Granny Webster and The Stepdaughter, and I relished being back among her unpredictable turns of plot, deftly drawn characters, biting but humanistic humor, and effervescent, incisive, worldly-wise social observations.

Corrigan’s opening finds the elderly Devina Blunt, bereaved three years before by her husband’s death, still mired in sorrow in her Wiltshire home. Her life undergoes a sudden transformation, however, with the arrival of the wheelchair-bound young Irishman Corrigan – he prefers only his surname - rolling through the countryside to collect funds for a new library for the St. Crispins hospital. Corrigan’s interruption of Mrs. Blunt’s static grief falls like a drop of brightly-tinted solution into water – a gradual diffusion that irreversibly colors Mrs. Blunt’s grey world. His gift for conversation, sympathetic ear and unfiltered frankness affront and disarm at the same time, forcing Mrs. Blunt from her cocoon of sadness. Though Corrigan departs empty-handed this first visit, he leaves a palpable void that Mrs. Blunt fills with hope that he’ll return soon. He does.

Mrs. Murphy never climbed Mrs. Blunt’s stairs, she always stormed them like a military unit making a headlong charge to gain some useful vantage-point. She was very short and her squat body carried enormous weight. Yet she still moved around the house with a pointless but frenetic speed. When she charged up Mrs. Blunt’s staircase, she always managed to make the carpet slippers that she wore, since shoes hurt her swollen feet, sound just as menacing as the running tread of regimental boots.

With each visit Corrigan seems to nudge aside his Irish counterpart as he draws closer to Mrs. Blunt, now aflame with a desire to do something useful:

She felt that, like someone in the Bible, her eyes had been opened by Corrigan. She suddenly understood that grief had made her cruel and she thought that at last she knew why her relationship with her daughter had become so distant and strained…when she thought about her life as compared to that of Corrigan, she felt that whereas he had found a way to escape from the prison of his infirmity by the use of his mind and imagination, she, who had never suffered from any physical disability, had crippled and imprisoned herself by her refusal to use her brain.

Inviting Corrigan to move in, Mrs. Blunt awakens to activity at an accelerating pace and with expanding ambition: renovating the house to accommodate Corrigan’s disability, learning to drive, and purchasing up adjoining land to create a farming cooperative. In moments of leisure, she and Corrigan recite poetry, converse about literature and life, and pop open one bottle of champagne after another.

Mrs. Blunt’s daughter, the unhappy Nadine, is meanwhile stuck in London in her own domestic stasis, minding twin toddlers and cooking for the “ungrateful young people” her patronizing husband invites to dinner. Neglectful of her mother since her father’s death, Nadine is nonetheless concerned when she hears of Corrigan’s presence in the family home. She takes up the offer of her closest friend, the high fashion model Sabrina (another of Blackwood’s unforgettable characters: a bright young woman acutely aware of the brief shelf life of her career and a complete slob everywhere outside the camera’s frame) to pay a visit to Wiltshire to find out what’s going on.

The ensuing events upend expectations and add depth to Blackwood’s characters, who, as in her other novels, come off the page as singular beings irreducible to simple behaviors. Though Blackwood can be merciless in describing the witless or those who hew closely to convention (an obsequious minor character is “a little squirt of a boy whose energies seemed to have gone into cultivating a crop of acne boils”), her characters are almost always bigger, and often better, than they - or we - thought they were, conveying a genuine interest in the capacity of persons to be multi-faceted, surprising, and deeper than their surface appearances might suggest. Blackwood’s faith in human complexity extends to her characters’ navigation of social situations and problems; in Blackwood’s world, rigidity or reliance on expediency and authority to determine what should be done are intolerable paths. Rather, Blackwood invokes a sense of fair play that, in challenging situations, prioritizes the real life emotional and psychological consequences for people over the distancing technicalities of principles or rules. Even in serious matters - perhaps especially in serious matters - a generosity that rewards playfulness and the use of one’s wits makes Corrigan a wry work that celebrates the triumph of these qualities over conformity, banality, and ploddishness. If almost no one in Corrigan turns out to be the persons we assume them to be – or even the persons we may later suspect them to be – it’s thanks to Blackwood’s magnanimous refusal to underestimate people. And though this magnanimity combines with a particularly black humor in unfolding human contradictions and perplexities, it would be hard to imagine any reader (other than perhaps the most rigid of teetotalers) not enjoying this ride – especially with so much champagne flowing.