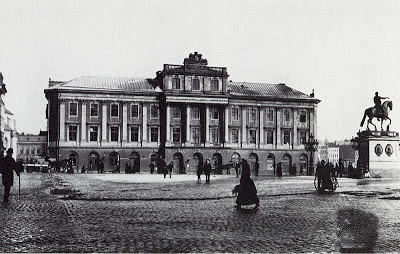 Carl Jonas Love Almqvist’s 1834 work The Queen’s Tiara (Drottningens Juvelsmycke) - “The Great Swedish Classic” according to the cover of my Arcadia Press edition - ranked easily among the most fascinating books I read in 2012 and among the oddest books I’ve read in any year. Its oddity derives from multiple sources, not least of which is the book’s incorporation of varieties of form. Almqvist called the work a “fugue” – and while calling it a novel seems wholly inadequate, I’ll use the term here for convenience and for my being unable to think of another form capable of containing The Queen’s Tiara’s grab bag of first and third person narration, dramatic dialogue, exchanges of letters, short theatrical vignettes, packages of documents, legal testimonials, songs and narrator’s footnotes that play along the edges where reality meets fiction.

A sort of realist fairy tale arranged in 12 “books,” The Queen’s Tiara is framed by a prologue presenting this compendium of texts as evidence compiled to tell of events surrounding the assassination in 1792 of Sweden’s King Gustav III at a masked ball in the Stockholm opera house. An enigmatic narrator, Richard Furamo, nostalgically recounts his tale to a companion, Herr Hugo, during a discussion of theater at a family dinner decades after the tumultuous period of “duels and double jealousies…of tempests over locks of hair and fires in the heart” in which his story is set. Furamo focuses not so much on the assassination itself – though that scene is vividly related – but on tangential incidents reconstructed following a chance encounter with two mad, bitter sisters confined to a castle where Furamo had lodged one night while traveling. Supplementing his own narrative skills with the documents he has obtained to piece together the sisters’ history, he weaves an extraordinary story.

A summary of the story’s convoluted plot would tax my ability to condense it as well as any reader’s patience with the attempt, but cataloging some of its chief elements may offer a flavor of what’s involved: a conspiracy to assassinate the King; two young sisters, Amanda and Adolphine, and their soldier paramours, Ferdinand and Clas Henrik, both linked to the conspiracy; a case of mistaken identity that shatters the stability of this romantic quadrangle; the masquerade ball attended by all during which the King is mortally wounded; the flight of the conspirators and arrest of the assassin; the theft of a precious, bejeweled royal diadem (the Queen’s tiara of the title); and finally, fully occupying the second half of the book and obliging the sisters to “step aside and become mere walking on parts” in this drama, the emergence of the mysterious young lead character whose improbable name gives The Queen’s Tiara its secondary title: “Azouras Lazuli Tintomara.”

This androgynous, enchanting 17-year-old actor/actress, pursued by all and incapable of loving any, and whose captivating beauty has already fueled speculation about the cause of several impassioned suicides, occupies the innocent heart of The Queen’s Tiara. A creature apart, Tintomara nonetheless appears invariably proximate to the story’s central events: implicated by reckless gossip in the assassination conspiracy; inadvertently responsible for the diadem’s theft; connected intimately to the late King through a complexity of liaisons dangereuses of sex and blood (involving Tintomara’s mother, the King’s homosexuality, and the likelihood that Tintomara is the sibling of the King’s successor, his now thirteen year old son Gustav IV); drawn to the center of a quincunx formed with the sisters and soldiers we’ve met earlier (in one scene actually situated geometrically at the intersection of converging paths on which each of the other four persons approaches Tintomara at the same time, resulting in an explosive dispersal of all); and finally, squeezed by the exigencies of politics between her devotion to the new young king and the nefarious ambitions of the state’s cruel regent.

If all of this sounds absurdly complicated, it is. It is also wondrously imaginative and clever, whipping sexual psychology and political theater into a vortex in which the disruptions generated by the decapitation of state produce an echo - or perhaps a resounding overtone (The Queen’s Tiara is replete with references to music) - in those caused by Tintomara’s ambiguous gender and beguiling beauty. Though The Queen’s Tiara coalesces loosely around historical facts, it wanders far into fanciful realms, in particular by taking Gustav III’s well-known obsession with the stage and the operatic quality of his being assassinated during a masquerade ball and inflating these elements into a riotously theatrical tale with a porous fourth wall. In one of the book’s more memorable scenes, Adolphine, seeking to escape the opera house unnoticed on the night of the assassination attempt, climbs perilously up over the opera set, clinging to its faux treetops and clouds, dislodging a prop lightening bolt that crashes “into the operatic abyss,” and eventually making her way through backrooms and corridors as fantastically labyrinthine as a Piranesi drawing (both interior and exterior architectural descriptions throughout the work possess an exaggerated, chimerical quality). The narrator also occasionally pops in to remind readers that the story is partly his own invention, for example by acknowledging in a footnote the implausibility of this scene with the opera set and urging Herr Hugo, should he ever make the tale public, to enhance its believability by inserting a dangling rope to facilitate Adolphine’s ascent or perhaps a reference to her having taken gymnastics lessons.

I know of nothing quite like this strange, imaginative book, with its melding of historical fact and dramatic fiction, romantic fantasy and hard-edged reality, thriller-like political intrigue and aerial amatory caprices. Its gender-bending main character and the attendant inability of those around her/him to accommodate the mere notion of his/her existence are as canny and original as the tapestry of inventive, nearly baroque conceits Almqvist constantly unfurls, from copper plates depicting inquisitional tortures (used to frighten the imprisoned Tintomara) to an elaborate subterfuge involving a robotic mannequin. Yet far from seeming cultish or marginal in its fantasy elements, The Queen’s Tiara comes across as a classic indeed: a compelling historical novel that pre-figures Freudian psychology and blends Sadean cruelties with the most ethereal romanticism, an oddly moving invocation of the mysteries of human psychological and political processes, and a daringly imaginative caracole around the incestuous intertwining of reality and fiction. It’s also, on top of all that, an enormously entertaining story.

Posted by seraillon at 8:42 AM