Celestina, Out of the Sky 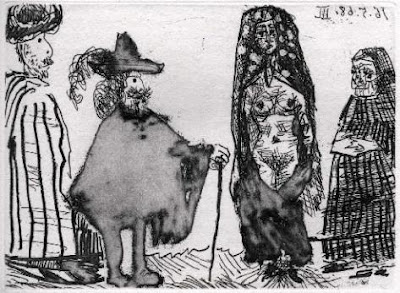 
I was all but fated to read Fernando de Rojas’ Celestina. I’d never heard of this early work of Spanish literature, which first appeared in 1499, before poking around the Internet one afternoon for information on Sir Peter Russell, the Oxford literary scholar and British intelligence officer who’d served as the model for Peter Wheeler in Javier Marías’ trilogy of novels, Your Face Tomorrow. Russell had apparently written extensively about Celestina, and I noted the title for future reference.  The following morning, while walking through San Francisco, I spied a book abandoned on the sidewalk, wet from the previous night’s rain. I was dumbfounded to discover that it was a Spanish language copy of Celestina. I actually found myself gazing into the sky wondering if perhaps the book had just dropped out of it.

It took me until now - thanks to the nudge afforded by Spanish Literature Month co-hosted by Richard of Caravana de Recuerdos and Stu of Winstonsdad’s blog – to pick up an English translation and read Celestina. I expected an interesting work that would expand my minimal knowledge of early Spanish literature. I did not, however, expect a work so subversive and daring, broadly humanistic, startlingly modern, outlandishly sexual, laugh-out-loud funny, moving, beautifully written, and vibrantly alive. This is the kind of book I live for: something unanticipated and new in my experience, capable of opening up whole new perspectives on literature.

Told almost entirely in dialogue, Celestina recounts the wily, advantage-seeking machinations of the shrewd, sixty-year-old bawd, Celestina, in her efforts to engineer for the noble Calisto a love affair with the object of his lovesick, stalker-ish obsession, the noble-lady Melibea. This quintessential upstairs/downstairs story pits servants against their masters and nearly everyone (other than the two hopelessly oblivious lovers) against nearly everyone else, all scheming with lust and self-interest, their public selves contrasting starkly with their private motivations. Much of the work’s humor, in fact, derives from the characters’ cynical private asides, mumbled under breath before emerging as audible platitudes intended to lubricate their listeners. De Rojas’ original title, the Comedia de Calisto y Melibea, molted in subsequent editions into the Tragicomedia de Calisto y Melibea, for the work, now known simply as Celestina or La Celestina, is indeed a comedy with - spoiler alert! - tragic consequences: nearly everyone dies, leaving at the end only Melibea’s grief-stricken father, Pleberio, who, in a scene of regret, solitude and anguish no less powerful and apocalyptic than the conclusion of King Lear, rails against the world as “a web of deceit, a wilderness, a home to ferocious beasts, a game played by cheats and tricksters, a treacherous marsh, a realm of thorns, a craggy peak, stony ground, a meadow full of serpents, a flowering orchard without fruit, a fount of tribulation, a river of tears, a sea of misery, toil without profit, sweet poison, vain hopes, fake cheer and true sorrow.”

Despite this pessimism, there’s no lack of wit in Celestina, which takes a bear’s paw swipe at a broad swath of Spanish society, cutting off power and hypocrisy at the knees with freewheeling, libidinous, scalding humor. Among de Rojas’ most daring criticisms are those putting Christians, Muslims and Jews on equal footing as all being children of Adam and Eve, with an explicit rejection of the notion of “noble blood”; implicating the clergy in corruption, sexual hypocrisy, and injustice (“spending time in church is the quickest way to get a reputation as a hypocrite”); an implicit rejection of the barbarity of Inquisitional persecution, with its “use of lying witnesses and torture;” and scathing attacks on the abuses and insensitivity of the rich - “bloodsuckers, ungrateful, rude leeches who ignore services received and never reward them” and who “break their servants’ backs with hollow pledges.” In de Rojas’ tale of love and woe, there is even a suggestion that God is “an enemy of reason.” However he fits into the raunchy, bawdy world of Celestina, God ranks as rather less influential in the lives of de Rojas' characters than are the chaotic eruptions of their own sexual passions.

The Penguin edition translated by Peter Bush contains an informative and succinct introduction by novelist Juan Goytisolo, who notes de Rojas’ break with prior literary forms and challenges more academic and reductionist responses to Celestina as having served mostly to obscure or vitiate the its liveliness, radicalism and striking modernity. As biographical information on de Rojas is abundant on the Internet, I’ll just cull a few key details from Goytisolo’s introduction. Born in the 1470’s near Toledo, de Rojas came of age at a critical moment in Spain, coinciding with the discovery of the New World, the defeat of the last Arab stronghold in Iberia, and most significantly, given de Rojas’ Jewish roots, the founding of the Inquisition and the edict expelling Jews who had not converted to Christianity. De Rojas’ own family of conversos suffered greatly under the purges; several were imprisoned and executed, including de Rojas’ father-in-law, burned at the stake for suggesting there might be nothing after death. Peter Bush notes that the young de Rojas, admitted to the University of Salamanca, “was entering a world of learning that was keeping at bay the Inquisition,” and it was in this corner of liberality in Inquisitorial Spain that Celestina was conceived in shrouded circumstances when de Rojas was only in his mid-twenties. Goytisolo addresses the remarkable range of literary talents on display in the work – its intense vitality of language, use of markedly different registers and interior psychologies for memorably drawn characters, and the weaving into the narrative of a complexity of overlapping meanings (on a purely lexical level, the double-entendre on display in Celestina is relentless and obscenely funny) – but focuses primarily on the work’s radicalism in terms of both its path-breaking form – neither novel nor theater piece - and its subversion of the Inquisitorial milieu in which it was written.

What gives Celestina much of its fresh, modern quality is precisely the subversive manner by which de Rojas brings off his sharp criticisms of class, privilege, power, and the Christian clergy. His strategies for conveying these dangerous ideas make for a fascinating history of the book’s first years of publication. The anonymous first edition contained a postscript describing the first chapter as a discovered manuscript that Celestina’s author claims he recognized immediately for its “beauty, its subtle artifice, its pliant but strong metal, the way it had been wrought, an elegant style, never before in evidence in our Castilian language,” and for which he then, over two weeks’ holiday, composed a continuation of an additional 15 chapters. Goytisolo points out that while “the paternity of the first chapter” – with minor stylistic and linguistic differences from the rest of the work – “remains a matter for doubt and debate,” the case for de Rojas as sole author is convincing. Celestina’s immense popularity resulted in a series of notations in subsequent editions in which de Rojas first reveals his identity by means of an acrostic, then later provides tortured, non-apologetic apologies for some of the book’s more audacious ideas in what appears to be an effort to minimize his culpability for such irreverence[i]. Readers of Don Quixote will recognize one influence of Celestina in Cervantes’ use of a similar obfuscation of authorship, and the indeterminate quality of Celestina’s origins and its deliberate, ironic subversion of narrative authority prefigure, by 500 years, the unstable texts and meta-fictional elements of contemporary world literature.

Celestina’s great humanism, its dark faith in equality and justice, also underscore its remarkable modernity. Its most appealing characters are those of the lower castes: servants, prostitutes, and those most vulnerable to the hypocritical dictates of power. Celestina herself is an iconic figure (small wonder that early audiences latched onto her, resulting in the change of title to bear her name). Though eyed with suspicion by many she encounters and bearing qualities easily reducible to caricature as crone, Celestina ultimately comes across as complexly human. An imaginatively resourceful woman, she has used her wits and her body to strategize a broad range of means of survival catalogued at length in the first chapter, including needlework; the manufacture of perfumes, cosmetics, creams and “unguents to turn your stomach;” the mending of “five thousand” maidenheads so skillfully that “when the French ambassador paid a call she sold him one of her wenches three times as a virgin;” and, most germane to the plot, serving as a go-between for lovers, with her collection of “stuff for curing love and making love work: gut from a stag’s heart, snakes’ tongues, quails’ heads, asses’ brains, horses’ foetal scrapings, babies’ crown, Moorish beans, lodestone, hangman’s rope, ivy berries, hedgehog prickles, badger’s foot, fern spore, stone from an eagle’s nest and a thousand other items.” To most, all of this is “pure stuff and nonsense,” but the reader can’t help but take Celestina at face value: “I’m an old woman as God made me, and not the worst by a long chalk. I live by my trade as any other woman and honestly at that.” One gets glimpses of the dual role Celestina has played with the young women around her, serving not simply as procuress for her own ends but as a sort of rescuer, protector and mother figure, as conveyed in a remarkable scene in the book’s ninth chapter in which Celestina patiently listens to two of her young charges, Areúsa and Elicia, speak frankly of the difficulties of their economic choices, their vulnerability to men and the whims of abusive masters, all the various injustices of their low position and their gender:

Women who serve noble ladies never enjoy love’s thrall and sweet rewards. They can never consort with their equals or have close friends they can ask about the simple things in life: ‘What did you eat for dinner?’, ‘You pregnant or what?’…

What a pain, how hard, how painful, to have ‘my lady’ on your lips all the time! ...They never call you by your proper names, only: ‘Bitch, do this!’ ‘Bitch, do that!’… Their greatest pleasure is to shout and their bliss is to find fault.

These glimpses of everyday conflicts mingled with obscene humor, quick intelligence and caustic criticisms reveal a depth of humanity and lay bare a rich complexity of social interactions, allowing the commonality of human experience and the struggle against power and injustice to emerge as the real stars of Celestina, Its resounding and often hilarious affirmation of the lives of common people in juxtaposition to the institutional forces that oppress them makes Celestina as relevant today as is its surprisingly bleak modern view of a chaotic and hostile universe. The debt owed to Celestina by subsequent works of Spanish and of world literature is clear in its profound use of irony, irreverence, and psychology, its innovative, radical literary form and its subversive critical stratagems. On a personal level, I could not have been more thrilled to discover this work for the first time. And if, improbably, Celestina indeed fell to my attention from out of the sky, then someone up there has one incredibly diabolical sense of humor.


Addendum July 17, 2012: Here's a link to a terrific interview with translator Peter Bush by Scott Esposito. 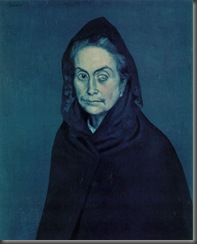 [i] A detailed account of Celestina’s first years, gently demolishing the arguments of those who consider the likelihood of separate authorship of the first chapter and characterizing de Rojas’ subsequent prefaces to the work as revealing a mounting and palpable sense of fear - is put forth in the exquisitely researched opening chapter of Stephen Gilman’s The Art of La Celestina, a book I picked up in the wave of enthusiasm I felt after finishing de Rojas’ work.
Posted by seraillon at 4:00 PM