Gabriele D'Annunzio: A Taste Too Far 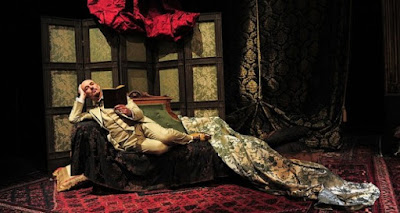 Since a couple of commenters on my 2016 recap mentioned Gabriele D’Annunzio, I thought I’d go back and see what I could make of the few notes I’d written about him. Certainly, D’Annunzio’s name had loomed among those of authors I’d skirted so far in my reading of Italian literature. D’Annunzio looms in a lot of contexts, from his playboy lifestyle to his rogue military missions to his super-charged reputation as the Fascist hero who might well have been Mussolini had not Mussolini steered him away from party leadership. In the literary realm, he looms thanks to a singular, provocative, flourishingly lyrical and melodramatically decadent style. The Fascism and the style have both made D’Annunzio something of a bête noir in Italy; a taste of his writing is almost enough to hypothesize that the mid-century return towards realism in Italian arts and letters might have had as much to do with D’Annunzio’s excesses as with the ravages of war. One can hardly imagine a writer more likely to produce in the reader, as the most generous response one could ever hope to have, a love-hate relationship.

Curiously, there’s a relative paucity of D’Annunzio’s works available in English, or at least in English that hasn’t been scrubbed and tidied up in translations that tamp down the works’ sexual elements. It took until 2013 for a bravely non-prudish translation of D’Annunzio’s best-known prose work, Il Piacere (Pleasure), to appear in English.

Though I read about half of that novel, I’m going to skip it and go straight to my entry point for D’Annunzio: a collection of short works translated by Raymond Rosenthal: Nocturne and Five Stories of Love and Death (1997). “Nocturne,” the book’s signature piece, represents a fragment of D’Annunzio’s lengthy prose poem Notturno, the first complete English translation of which also appeared only recently, in 2014. I read some of that new edition, and found the poem itself - a long meditation on war, patriotism, injury, recovery and memory, amplified with melodrama – little more interesting than the circumstances of the poem’s composition: the author, his eyes completely bandaged from being nearly blinded in a plane crash, composed the entire poem on tiny, individual strips of paper. These were just large enough for a single line and thus provided a means for measuring, in a tactile way, what he was writing, a method given typical D’Annunzian sentiment by his comparing it to “the way of the Sybils, who wrote their brief sentences on leaves scattered to the winds by fate.”

The conceits around which D’Annunzio builds the five stories in the collection are conceptually simple and punitively cruel. In “The Virgin Orsola,” a young teacher awakens from a near fatal case of typhoid fever to discover her sexuality, only to have this blossoming cut down by a brutal rape and subsequent pregnancy. In “The Sea-Going Surgeon,” a rapidly growing abscess on the neck of a sailor at sea becomes catastrophic when his inept shipmates attempt an amateur treatment. The narrator of “Giovanni Episcopo” recounts (perhaps to the person who has come to arrest him?) an abject tale of self-abasement and submission that leads him to murder. In “Leda Without Swan,” a chance love affair begins badly, and worse remains ahead. Even the book’s sunniest piece, “A Vigil,” involves a couple who, previously kept from expressing their feelings for one another by the man whose funeral they prepare together, now copulate next to his corpse.

I think it hardly matters that I reveal these plots, since, although they give a flavor of D’Annunzio’s adolescently provocative interests, nearly all of the stories’ attraction lies in their explosive, voluptuous, vital language. From the first pages of “The Virgin Orsola,” which opens the book, D’Annunzio’s hyper-rich prose announces a writer of impressive linguistic dexterity, and one who, far from shrinking from the ugliest scenes life has to offer, seems to exalt in them:

Supine on her bed lay the virgin Orsola in the grip of a feverish stupor, of an inert somnolence, her rapid breathing broken by sharp, rattling gasps. On the pillow rested her head almost completely striped of hair and her face of an almost bluish color in which the lids half-hid her viscous eyeballs and the nostrils seemed to be smeared with soot. With her fleshless hands she made small, uncertain gestures, vague attempts to seize something from the void, weird, startling signs which gave those around her a feeling almost of terror; her pale arms were shot through by muscular contractions, twitchings of the tendons; and now and then an unintelligible babble came from her lips, as if the words were caught in the soot on her tongue, the clinging mucus on her gums.

A similar appetite for the lurid appears in “The Sea-Going Surgeon,” when the sailor’s abscess worsens:

…the next day the cuticle covering the abscess was forced up by a blood-colored serum and split open, And the entire areas took on the appearance of a wasp’s next from which a flow of purulent matter oozed profusely. The inflammation and the suppuration went deeper and spread very rapidly.

In “Giovanni Episcopo,” the narrator encounters his fiancée’s father, turned to alcoholism due to being forced out of work by an eye disease, and accompanies the man to a tavern, where he gets a good look at the man’s face for the first time:

He lifted his glasses; and so much had the expression of his face changed, it almost seemed to me that he lifted a mask. His lids were lacerated, swollen, without lashes, filled with decay, horrible; and in the midst of that redness and that swollenness barely opened two tear-filled pupils, infinitely sad, with the profound and incomprehensible sadness one can see in the eyes of a suffering animal.

Such theatrical descriptions are often as not accompanied by rafts of meditations, or rather rhetorical questions, since usually D’Annunzio seems prepared to supply ready-made answers that offer little assurance or optimism (again from “Giovanni Episcopo”):

What can we change? Do our tears have any effect? – Each man is just anyone, to whom just anything can happen. This is the whole story; there is nothing else. Amen.

Has is ever happened to you, when looking for a long time at a woman, to suddenly lose all notion of her humanity, her social condition, the emotional ties which bind you to her, and to see, with an obviousness that terrifies you, the bestiality, the sheer femaleness, the blatant brutality of sex?

I liked D’Annunzio best when he left his questions open-ended and dialed his “vitality” back a bit (and compared to the lavish language and profligate rhetoric of Pleasure, these five stories are practically models of restraint). His descriptions can then turn from gaudily ornamental to supple and even delicate. Here, for example, from “The Virgin Orsola”:

Little by little, in the unconsciousness of sleep, Rosa’s head, almost tracing a semi-circle on the wall, bent towards the perturbed cleric. The slow reclining of that beautiful feminine head inspired a melting tenderness; and, since the movement somewhat altered the woman’s sleep, between her ever so slightly parted lids the rims of the iris appeared and immediately disappeared in the white cornea, like the petal of a violet floating in milk.

And lest I give the unfair impression that D’Annunzio’s writing is little more than a succession of grotesqueries and weighty, pedantic pronouncements, the narrative drive in these stories shows, despite D’Annunzio’s playing for effect, an ability to tell a compelling story with glimpses of human sympathy. In “Giovanni Episcopo,” for example, the story begins poignantly as the anguished narrator recounts to his unidentified listener the story of his 11-year-old son’s death. But such sympathy rarely lasts for long in D’Annunzio’s pessimistic world. What can one say about a writer who, with scarcely a trace of irony, can deliver lines like “No human creature loves another human creature – man has never been loved by another human creature,” or “Truly, the sun is the saddest thing in the universe”? Though Episcopo utters these words, the punishing endings to these stories suggest that D’Annunzio himself might have willingly spoken them.

Nonetheless, I suspect that I may not be done with D’Annunzio. Not many writers wallow as much in overblown, hyperbolic, eye-rolling melodrama as D’Annuzio does, but neither can many make one sit up straight when confronted with such density of voluptuous language. And while D’Annunzio makes an easy target, almost inviting criticism that could serve as equal and opposite reaction to his extravagances, it would be a mistake to dismiss him as a hack. Linguistic power like this doesn’t come along every day. I doubt I will ever be a subscriber, but the mere act of writing this post has my curiosity slightly piqued with regard to his late work about Venice, Il Fuoco (The Flame). Obsessed with that city as I am, I feel almost obligated to read the novel at some point. But that doesn’t mean that I’m not a little afraid. And besides, life is short.

Posted by seraillon at 5:56 PM