I didn’t set out to read Primo Levi’s The Search for Roots. It popped up in my search for something else, and I don’t intend to delve deeply into it here. But I found this collection, of 30 personally-chosen excepts of writing the author found “essential,” each accompanied by Levi’s own brief commentary, to be rewarding from cover to cover. I’ll highlight a few bits, particularly two selections I was thrilled to find.

As explained in Italo Calvino’s afterward, the book came about when publisher/writer Giorgio Borlotti asked several Italian writers to come up with an anthology. Only Levi replied, with the last of his books published in his lifetime. It’s my kind of collection, born out of free-ranging explorations and zeroing in on select passages: “I know of nothing more boring than an orderly reading curriculum, and believe instead in the unlikely juxtapositions.” Noting how some selections play off of others, Levi adds that such “occasional and erratic reading, reading out of curiosity, impulse or vice, and not by profession, is always going to produce this kind of happy and inexplicable serendipity.” In a humble introduction, Levi makes explicit that he’s not after a Borgesian “auto-anthology,” but rather influences that might have informed his own writing, searching for these “roots” in “nocturnal work, visceral and for the most part unconscious.” As is fitting for this chemist/writer who survived Auschwitz, his selections come from both humanities and sciences, chosen for both the delight they bring to appreciative readers and their elucidation of meaning in the human condition. A chart provides some coherence to his choices: 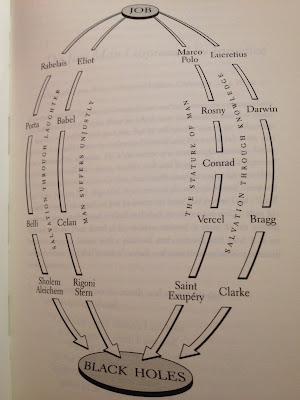 Starting with “The Book of Job” and concluding with an essay on black holes, Levi’s selections journey from Rabelais to Darwin, Conrad to a manual on laboratory safety, Jonathan Swift to a page from an American trade standards text concerning the testing of an adhesive for trapping cockroaches. The choices are weighted about one fourth Italians to three-fourths writers from elsewhere. With neither apology nor prejudice, Levi admits his surprise and embarrassment, however, at having omitted, in his “nocturnal work,” women and non-Westerners.

As I’d been lead to the book in pursuit of a particular Italian work, I was most interested in Levi’s Italians. In this regard the book proved a great find. From Roman sonneteer Giuseppe Gioacchino Belli, Levi includes four sonnets, three completely new to me. A compelling excerpt from Mario Rigoni Stern’s 1978 novel, Story of Tönle, tells of a shepherd during WWI confronting a group of Austrian soldiers on his farm and arguing plainly with them in favor of the peaceful continuation of his routine farming responsibilities, a request denied, of course, by the soldiers, but which starkly reveals the disruptions of war. Levi also includes part of “The Day,” by Giuseppe Parini, an 18th century poet whose wry depiction of the aristocracy amid the “crush of heroes” they offer up to one another as models, provides amusing portraits of these privileged Italians, hardly capable of seeing themselves as ordinary, engaged nonetheless in ordinary idiocies.

One of the joys of the book is the access it provides to these un- and under-translated Italians.  A terrific surprise to me was to find an excerpt of Carlo Porta’s long poem in Milanese dialect, Olter desgrazzie de Giovannin Bongee (“Other Troubles of Giovanni Bongeri”). I’d all but given up on finding it in English after learning of its existence through Paolo Mantegazza's utopian novel The Year 3000, in which the narrator describes Porta’s 1812 poem as the comic pinnacle of Italian literature. Even in the short episode chosen by Levi (one goes to literature with the translated excerpt one has, not with the translated entirety of a work one might want to have), the reader gets a delectable taste of Porta’s style and wit. Attending the opera at La Scala one night, Giovannin Bongee’s wife Barberina is pinched on the behind by one of the men behind her - a fireman, lamplighter or soldier. The anger of Bongee as he tries to determine the culprit provides plenty of laughs and sparkling language. It’s easy to see here, in this ribald passage that delights in dialogue, the reasons Giuseppe Belli cited Porta as a major influence, borrowing from him not only the decision to write in dialect (Romanesco, in Belli’s case), but also a focus on human behavior in intimate, immediate detail. The scene ends comically as Bongee, narrowly escaping a street fight, arrives home with his wife, only to discover her a few minutes later lying on the bed, “racked by sniffles and groans”:

What is it, Barberina?...It hurts…Where?
Here like this…Your bum? You’re joking!...It’s right
here…It was perhaps…? Yes, that bear!
Let me see…I don’t want to…It’s a husband’s right…
I’m ashamed…Are you mad?...That’s nice…There,
don’t move…Go gently…Don’t fight…
Enough: at least with all my mollifications
she gave up her naked body to my inspection.

Heavens, your Honour, if you had been aware
of that scarlet weal, livid and contused
which covered a quarter of her derrière,
with two black moustaches. At least her poor abused
skin there, thank heaven, was taut and spare
like a well-tuned drumskin;
because if it had been a little more slack
I don’t believe we’d have ever got it back.

The “black moustaches” turn out to be “table oil and candle wax”; in a later scene omitted from Levi’s excerpt, Bongee’s fight with the guilty lamplighter apparently lands him “other troubles.”

The reason I’d come across Levi’s anthology in the first place, though, was to have a chance to read what may be the only published excerpt in English of another significant Italian work unavailable to English readers, Sicilian novelist Stefano d’Arrigo’s massive novel Horcynus Orca. Described as a re-invention of "The Odyssey" and a meditation on forms of death, Horcynus Orca consumed decades of the author’s life and went through endless revisions until it first appeared in print in 1975 to great acclaim. A proposed English translation never materialized due to competition between publishers; the sole translation to date, into German, appeared only in 2014.

“Urchin Death,” Levi’s excerpt of this 1,100 page monster, gives a glimpse of the work both tantalizing and grim. As the Nazis are being driven from Naples in 1944, a group of street urchins have thrown a makeshift grenade beneath a German tank, halting its movement and forcing its driver to emerge. For ten long pages, d’Arrigo lets his narrative rest squarely on the tension between the soldier’s certain, impending death and the subtle, almost cinematic series of moments and glances and gestures that pass between the children and their prey, the tension broken only briefly, an eye in the storm, by the strange arrival of a young girl leading her blind father over to check out the situation. If the rest of the novel is anything like this short, powerful passage, translators should be lining up.

So there: two glimpses of major works of Italian literature as yet untranslated into English accompanied by 28 other “essential” pieces of writing, chosen by a writer of formidable talent who affirms that authority can be conferred by being an engaged, perceptive reader with no small degree of discernment when it comes to knowing what is meaningful. The Search for Roots makes for worthy reading for anyone, an unusually rich place from which to start exploring in myriad exciting directions.

Posted by seraillon at 4:09 PM