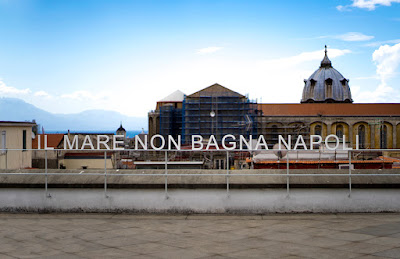 For a Neapolitan work to begin with the words “It’s sunny! Oh, it’s sunny!” is pretty much a guarantee that a leveling blow waits just around the corner. Anna Maria Ortese’s powerful 1953 book, Il mare non bagna Napoli - The Sea Doesn’t Bathe Naples, or as translated in substantially modified form in a hard-to-find 1955 English edition by Frances Frenaye, The Bay is Not Naples - delivers numerous knock-out punches, revealing a different side of the author than that displayed in The Iguana. Ill-equipped for the Italian original, I made do with Frenaye’s edition, which contains eight pieces, three added by the translator, who also subtracts a sizable chunk of the longest of Ortese’s themes. As the book is so difficult to obtain in English, I’ll be less restrained than usual in providing details.

Il mare non bagna Napoli – which saw the light of day thanks to the enthusiastic efforts of Elio Vittorini and Italo Calvino - offers devastating critiques of the city. In a style that marks much post-war Neapolitan writing (and echoes the blend of fact and fancy of Curzio Malaparte’s portrait of 1944 Naples in The Skin), Ortese combines journalism with fiction to get at Naples’ inexorable social problems. Along the way, she takes to task her fellow Neapolitan writers for having rejected the “blue sky” writing of an earlier generation only to “replace it with an art apparently rooted in arid desperation.” This last phrase, articulated in the “The Silence of Reason,” the excerpt from the long piece truncated by Frenaye, both characterizes the prevailing Neapolitan style and points up Ortese’s rejection of its lack of determination to fight back. In the book’s pointed views of both Naples and those who wrote about it, Il mare non bagna Napoli struck the city’s readers - and especially its writers - like a tsunami.

Moving progressively from a neorealist literary style to a more journalistic one, Frenaye’s translation of Ortese’s book begins with four pieces focused on daily life in Naples’ poorest quarters, where Ortese had spent a good portion of her youth. The first piece, “A Pair of Glasses,” an increasingly gritty story with a Katherine Mansfield-style attention to the lives of children, concerns Eugenia, a young girl in a grim apartment building whose family splurges to buy her a first pair of eyeglasses that reveal to her both the gloriousness of the world and the undeniable misery of her immediate surroundings. “The Sea and Naples” continues Ortese’s depiction of this squalid neighborhood, reaching a tragic nadir with the death of a baby by “an accidental fall” from a window after her father “by sheer chance struck the baby” while beating the child’s mother (the lancing italics are Ortese’s). A portrait of domestic life in the mold of Matilde Serao follows: “Family Scene” delivers just what its title promises while plunging the hallowed Italian notion of “family” into the same chilled cauldron of dry-ice dry irony to which “sunny” has been consigned. Concluding this section of the book is a snapshot of Neapolitan street life, “The Gold of Forcella,” depicting the rough neighborhood named in the title and the quiet desperation with which its residents wait in a pawn shop in the hope of redeeming some prized object for a few thousand lira.

In “A City in Spite of Itself,” Ortese takes a turn that might seem abrupt were her goal simply to produce a series of short stories. Instead, this piece is riveting journalism as filtered through a fiction-writer’s eye, an exploration of the vast Granili III-IV apartment block, a converted military building on Naples’ outskirts that, at the time of Ortese’s visit, housed some 3,000 people packed 20-25 to a room. Ortese here digs deeply into the wretchedness of life among Naples’ poor after the war, many living in conditions as bad or worse than they suffered during the occupation and bombing. Simultaenously, the story presents an unforgettable portrait of the determined “matriarch” of the building, Signora Antonia Lo Savio. Ortese’s account of her initial meeting of Lo Savio demonstrates the author’s remarkable hybrid style, in which it’s easy to see how a surrealistic element might emerge in later works:

A woman swollen up like a dying bird, with black hair hanging over the hump on her back and a lemon-yellow face dominated by a big pointed nose, which came down all the way to a harelip, stood brandishing a comb in front of a jagged mirror, while she held a bunch of hairpins in her mouth. ‘Just a minute,’ she said when she saw me, and she even smiled…She must have been the offspring of hideously diseased parents, and yet there was something regal in the way she walked and talked. And there was something more, a bright light in her mouse-like eyes, which revealed not only her consciousness of evil in all its ramifactions [sic], but also a very human zest in combatting it.

That someone makes an effort to provide essential services in this inhuman inferno only marginally eases the grimness of Ortese’s essay, as evident in her account of the youngest denizens of the apartment block:

There was nothing childlike about these children except their age. They were little men and women, already acquainted with everything, with the beginning of life and its end, already eroded by poverty, idleness and vice, burdened with sickly bodies and twisted minds, wearing imbecile or corrupt smiles on their faces, artful and at the same time acting with a desolate indifference. Ninety percent of them, Antonia told me, are tubercular or susceptible to tuberculosis, that is when they are not rachitic or tainted with syphilis from their fathers and mothers. They are accustomed to witnessing their parents’ intercourse and the imitation of it is their favourite game, indeed almost the only one they have except for throwing stones.

These are the children “lucky” enough to survive. In a scene scoured of all sentimentality, Ortese describes rushing out with Lo Savio to where a young boy has fallen dead while at play with his friends. Neighbors gather: “Now they were taking him to the Morgue for examination, and parents and friends had turned the occasion into a sort of funeral, the simplest funeral I had ever seen. The dead boy wasn’t in a coffin but in the arms of his mother, a yellowish woman who looked half like a fox and half like a dustbin.”

Ortese’s lengthy interrogation of her fellow writers in “The Silence of Reason” provides an invaluable glimpse into the Neapolitan literati of her time – though not a particularly flattering one. It’s a shame that this piece has been cut, as one seldom encounters a writer so sober and burningly direct in criticizing her own circle of writers from within. Organized around a peripatetic series of home visits with Luigi Compagnone, Domenico Rea, Raffaele La Capria and, presumably, others mentioned at the essay’s beginning (Frenaye omits more than half of the piece), “The Silence of Reason” accelerates the decline in the sunny optimism about the city that began with Eugenia’s anticipation of new glasses as well as in whatever self-restraint Ortese has had up to this point. Her comments on Naples turn acidic, describing its writers as no more than anyone around them representative of:

the true Naples, all bright colours and heedlessness, and of the tradition of her ancient past – they were all a part of the current of troubled youth that ran beneath the great pile of antiquity…The city around them was what we all know: a larva stream of dollars and pus. Americans had stepped into the shoes of the Bourbons, and the syllables ‘O.K.’ were enough to cause every heart between Vicaria and Posilippo to tremble…

But Ortese’s most vitriolic condemnation appears in the final two pieces. The first of these recounts the pain of her return to Naples after a long absence to encounter only the ravages of age, dementia, and the daily wear and tear of the city on old friends. Still, Ortese manages to cull some slight romantic affection for Naples out of the blue sea and warm air, enough to push her into the book’s final piece, “A Strange Apparition.” Here she challenges the virus with which even she is infected, the sentimentality that can see “a truly exceptional city…a marvelous confusion,” only later awakening one to “the real horror, stemming from the destruction of thought itself.” As though echoing Jean-Noël Schifano’s characterization of Naples as a city run by passion, Ortese goes Schifano one further by limning “this extraordinary being, Passion,”

…as widespread as poverty, as agreeable as indolence, as dangerous as rhetoric or vice, and yet able at times to provide some consolation, and almost as lightfooted and superficial as the moon. It was to this fatuous and pernicious creature, perpetually appearing and disappearing, present everywhere and nowhere, whose name was never pronounced simply because its power was written on every side, that the City, amputated of its last vestige of thoughtfulness and indeed any semblance of mental systemization, owed its morbid and hallucinating beauty…All around lay the mad City, with children and dogs poking about in the garbage that littered its streets, with broken-down houses on either side, shattered lamp-posts, abandoned vehicles without wheels, fragments of champagne bottles, and everywhere masses of dead men’s skulls and bones. And the truly grotesque thing was this: that when the terrible First Citizen of the City passed by, these skeletons, which should normally have been weary unto death, came to life and danced in the streets; ancient jawbones shook with laughter and tears gushed out of cavernous sockets…So it was that the place knew no peace.

It seems unjust that Ortese’s book has yet to be translated in full and that the one existing translation is nearly impossible to obtain. The book clearly still serves as an important reference for contemporary writers and artists from Italy’s south. Sicilian writer Roberto Alajmo, in his amusing 2005 “anti-travelogue,” Palermo, even borrows Ortese’s title for that of a chapter in his own book (substituting Palermo for Naples), and if not already apparent to readers familiar with Elena Ferrante’s Neapolitan quartet, Ortese’s book is an undeniably significant influence. Given the fever currently attaching to Ferrante’s volumes, a reissue of Ortese’s book should be a priority. Besides provoking a sobering realization that little seems to have changed in the lives of Naples’ poor over the past 60 years, Il mare non bagna Napoli gives an essential glimpse into the origins of Ferrante’s work. The first two stories of Il mare non bagna Naples are so close in atmosphere and subject to Ferrante’s books that they might even be mistaken for discarded drafts. The characters inhabit a similar courtyard apartment building, endure the same entrenched atmosphere of violence and neglect, bear Neapolitan names identical to some in Ferrante (including “Lina” and “Nunziata”), and even include, in a central, galvanizing scene, a mother devastated by the loss of her child, her “reddened fingers stuck into her hair as if to claw the brain below.” Ferrante’s work pays homage to Ortese’s overarching tone of indignation, particularly when directed at the suffering in what Ortese in one scene refers to as “the eternal story of the mothers, wives and daughters of the human race.” However similar their aims, though, these writers differ significantly: in thematic and temporal scope, certainly, and not least in Ortese’s splendid, strange language compared to Ferrante’s galloping, workhorse sentences. Nonetheless, readers of the latter writer should find Ortese’s book a mesmerizing companion to Ferrante’s Neapolitan project, as well as a daring work of both social criticism and narrative inventiveness that stands, toweringly, on its own.

For much of the background on Il mare non bagna Napoli, I am indebted to Professor Lucia Re's long and fascinating article on the book's history, themes and reception.