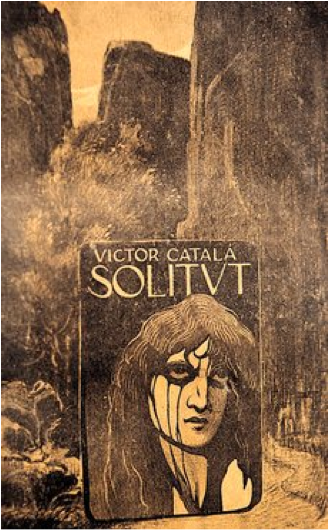 In taking a chance with a relatively unknown work of literature, one sometimes turns up buried treasure. Victor Català’s 1905 novel Solitude, for me, is one such work; more than a few of its indelible scenes have settled in for good.

I’m probably not alone in my ignorance of Català, whose fame has remained largely within Catalonia, where the author is regarded as among the finest of 20th century Catalàn writers, primarily due to Solitude and its pioneering depiction of female sexuality and desire. Català’s absurdly patriotic name, meaning “Catalan Victory,” is rather obviously a pseudonym. It belonged to Caterina Albert i Paradís (1869-1966), a writer of poems, plays, numerous short story collections and two novels, whose early work garnered swift attention and high praise. Following Solitude, however, Albert published only sporadically for the remaining 61 years of her life. Assuming the rest of her work is anything like this exceptional novel, those periods of silence may represent a substantial loss.

Beginning like a female version of Dino Buzzati’s Desert of the Tartars, Solitude follows the young Mila on the long road to a lonely mountain hermitage, where her new husband Matias has accepted, for reasons incomprehensible to his wife, the position of caretaker. The journey creates a rich chiaroscuro of hope and foreboding, echoed by correspondingly dramatic descriptions of the rugged landscape. Signs of disaffection in the marriage appear on the way. In one of Albert’s characteristically robust and specific images, Mila glances at her husband, whose back,

broad and soft as a pillow, strained against the black jacket that stretched from armpit to armpit, as if in constant danger of ripping asunder.

‘How fat he’s gotten since we married,’ thought Mila, remembering how tight all his clothes had become, so that he seemed crammed into them like a straw doll in its rags.

Once installed at the hermitage, a “house full of bolts” described with as much melancholic intensity of feeling as Buzzati’s mountain fortress, Mila begins tackling years of neglect. Over weeks she spends scrubbing walls and floors, clearing cobwebs, and dusting the figure of St. Pontius and the chapel’s morass of relics, Mila’s recognition of Matias’ laziness and indifference to her own needs crystallizes. Her almost complete isolation is otherwise peopled only by a kind shepherd, Gaietà; his eight-year-old assistant Baldiret; members of Baldiret’s family from the nearest farm, including Arnau, who develops a strong attraction to Mila despite his betrothal to another; and Anima, a louche, nearly feral peasant, “more beast than man,” who survives by hunting rabbits with a ferret he calls his “wife” and whose unexpected, irruptive visits to the hermitage provoke unease. Given this stage-small cast of starkly defined, even symbolically named characters, the reader can discern early on, helped by ample foreshadowing, the direction interactions between them are likely to take. Any predictability, though, is more than outweighed by Albert’s inventiveness, bold, precise descriptions and distinctive style, and by the grand landscapes against which this drama plays out.

Approaching the end of Solitude, I began to wonder the same thing that Mila herself articulates: “What else could possibly happen?” For despite flashes of happiness and pleasure, Mila’s life reads like a catalog of drudgery and misfortune. As her husband spends more time with the miscreant Anima and in gambling away the couple’s meager savings, Mila’s isolation increases, leaving only Gaietà and Baldiret, while not tending their flock, as companions and protection against Anima’s disconcerting appearances.

Albert conveys the coarse texture of Mila’s existence through vivid naturalistic detail that can take on a decadence Zola might have envied, as in a scene graphically documenting the skinning of a rabbit, one of several potent set pieces that add to the novel’s force. Another depicts a religious festival at the hermitage that combines the rural revelry one might find in a painting by Brueghel the Elder with the caustic grotesquerie of one by George Grosz, as the mob-like celebrants leave behind

Especially unforgettable - surely one of the great food scenes in literature - is an account of a meal of large snails the shepherd has gathered to serve with some garlicky aïoli. After roasting them in a fire - “souls in torment…still begging for more, hissing and sputtering like sinners in Purgatory” – the hungry group pulls them from the embers, “soldered together with dark, sticky paste” and oozing “a yellowish-green liquid,” with Anima nauseatingly “crack[ing] the shells between his teeth like green almonds, and, after spitting out the pieces, swallow[ing] the snails.” But Albert’s descriptive power comes in a wide range of registers, even edging into the surreal, as when Mila has a dream of St. Pontius pelting her with scarlet hackberries that enter through a gash in her forehead, or the ethereal, as in a later description also involving snail shells, here filled with oil and “nailed to doors, balconies, and windows,” forming

diminutive lamps [that] glowed in the mountains’ high solitude, where the scent of violence still seemed to linger, and outlined the hermitage with tiny points of light, making it look like a fairy palace in one of Gaietà’s stories.

In these stories, slipped contrapuntally in among passages chronicling the hard life at the hermitage, Gaietà recounts enchanting, occasionally gruesome folkloric legends sprouted “from every field, rock and branch,” and that draw on Catalonia’s Aragonese and Moorish past as well as the gloomy history of the hermitage itself. Under their spell, Mila emerges from her solitude and finds herself drawing closer to the shepherd, both alarmed and pleased by the feelings he arouses in her. The young Baldiret too gloms hungrily onto any suggestion of story, a precious resource in a life of such scarcity and deprivation.

This weight of ancient myths on the present, making almost palpable the fantastical world of fairies, spirits and phantoms, is reminiscent of the novels of Albert’s Sardinian contemporary Grazia Deledda, as is the nearly ethnographic attention Albert lavishes on particulars of rural customs and superstitions. One comes to know the landscapes, flora and fauna, peoples and manners of the region. In contrast to Deledda’s gauzy evocations, however, Albert’s descriptions are hard-edged, physical, raw. Her focus on the poverty and harsh, sometimes violent quality of life in the mountains also calls to mind the alpine novels of Charles-Ferdinand Ramuz, with whom she shares a similar painterly, almost cubistic style of description.

Though literary portraits of women trapped by marriage and other social institutions and tormented by desire are hardly unusual, Albert’s protagonist perseveres in ways that contrast strongly with female characters of an earlier generation. Unlike Flaubert’s Emma Bovary or Ana Quintanar in Leopoldo Alas’ novel La Regenta (with whose life, though of a completely different class and social milieu, Mila shares many similarities), Mila, in an effort to extract herself from her oppression, wages a defiant protest against her condition.

Solitude, with its carefully constructed, intrepid aesthetic pleasures; agility and modernity; and powerful portrait of female conviction and courage, is a novel I’m pleased to have discovered and eager to pass along. I’ll be equally eager to read Caterina Albert i Paradís’ second, more experimental novel - the intriguingly titled Un Film (3,000 Metres) (A 3,000 Meter Film) - should it become available in English translation.

Solitude is translated by David H. Rosenthal and published by Readers International. I learned of the book when translator Peter Bush mentioned it during a recent talk.