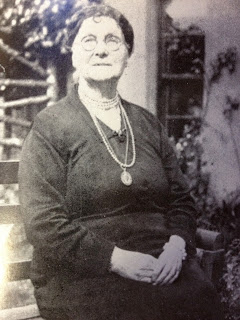 Jack Loudan’s O Rare Amanda! counts among the most embarrassing books I’ve encountered. The embarrassment - my own - stems from my having read the book while on public transportation. It is not unusual in San Francisco to witness public displays by persons solipsistically seized by some secret mirth, but I am usually not one of them. My inability to stifle my tittering and snorts of laughter, more than once resulting in my spewing my coffee, caused some fellow passengers to edge away.

Loudan’s 1956 biography of Irish writer Amanda McKittrick Ros (1861-1939), frequently heralded as the worst novelist in the English language, offers a well-researched, affectionate, even admiring portrait. Ros, a literary folk artist, provided to fiction something akin to what Mrs. Miller provided to popular song. Rather than indulging in easy ridicule, though, Loudan, who took the trouble to get to know Ros personally, takes her seriously. He situates her not on the eccentric fringe – or rather, not only on the eccentric fringe - but places her delirious combination of romance and nonsense in the context of other literary trends and writers. The latter include her two influences, Marie Corelli and Regina Maria Roche (Ros was not much of a reader), as well as respected writers whose works might, with generosity, be aligned with her own, including Lewis Carroll, Edward Lear and even, in view of Ros’ idiosyncratic language, James Joyce (Ros herself would have fumed at the Carroll comparison; Loudan notes that her envy at the sum paid for the original manuscript of Alice in Wonderland led her to read the book, which she found to be “an idiotic, nonsensical, whimsical disjointed piece of abject happenings bursting with Stygian Style Expressions lined throughout with a pricky-patterned policy the gods would grunt at & decent minds abhor.”).

O Rare Amanda! alternates biographical material with chapters devoted to each of her three novels – Irene Iddesleigh, Delina Delaney and Helen Huddleston - and her two books of poetry, Poems of Puncture and Fumes of Formation. An inspiration for Elizabeth Taylor’s fine novel, Angel, Ros claimed to have begun her first novel, Irene Iddesleigh, at a precocious age, though this appears to have been a typical Rosian amplification. Her novels employ classic Victorian themes, each featuring a young, impecunious woman crossing class boundaries and suffering through love and deception with “men of rank and wealth and power.” But the manner of their telling is utterly singular, as almost any passage reveals (part of the hilarity of O Rare Amanda! comes from Loudan’s extensive sampling of her work, but as the Internet offers readers an abundance of Ros, I’ll forgo doing the same). With what Osbert Sitwell called an “innocently garish and ridiculous” style, her narratives employ alliteration, dangling modifiers, pause-inducing imagery, words used in bafflingly novel ways, characters left in one setting only to reappear mysteriously in another, temporal impossibilities, and improbable behaviors. “Her world is one of people who speak and act so unlike mankind that we do not expect them to behave normally,” writes Loudan.

Initially self-published, Ros would likely have vanished into obscurity had not her first book been forwarded to humorist Barry Pain. Reviewing it in 1898, Pain called it “The Book of the Century…a thing that happens once in a million years. There is no one above and no one beside it, and it sits alone as the nightingale sings. The words that would attempt to give any clear idea of it have not been invented.” Pain’s review thrust Ros into popularity and set her on a lifelong, furious crusade against critics. Loudan supplies a full two-column page of terms she used to describe them; “bastard donkey-headed mites,” “talent wipers of wormy order,” and “the mushroom class of idiotics” are among the kindest.

One of the strengths of Loudan’s book is his attention to the critical reception of Ros’ output. Few disliked her work. In addition to a strong popular following, she also found favor among the intelligentsia, who rallied around her singular talent, launching “Amanda Ros Clubs” and holding dinner parties where fans competed to impersonate her style. Several critical accounts Loudan includes are nearly as amusing as Ros’ own words; the critic Thomas Beer, for example, wrote that Irene Iddesleigh left him “dizzy.” A delicately nuanced, droll assessment of her talent by Aldous Huxley, who “saw in her circumlocution ‘the result of the discovery of art by an unsophisticated mind and of its first conscious attempt to produce the artistic,’” led Ros to declare him one of the few persons capable of understanding her. Subtlety in the recognition of her work, however, was lost on Ros, who seemed, like some of her readers, incapable of grasping sarcasm unless it bludgeoned her. Loudan limns this appreciation gap by suggesting that “Amanda is the most perfect instrument for measuring the sense of humour.”

For all of Ros’ engagement with the “crabbing critics,” her high opinion of her own work never seemed to waver. Late in life, she asked her publisher whether she might “make a dart” for a highly remunerative literary award she’d just learned about (the Nobel Prize), and also predicted that her writing would stand the test of time and be read “1,000 years from now.” But despite her obliviousness to the manner in which many viewed her writing, Ros seemed at times to have had some perhaps accidental but nonetheless keen insight into what she was doing. “My chief object in writing is and always has been to write if possible in a strain all my own.” Few would dispute that she succeeded. And in the end, Ros may have the next to last laugh (the last, surely, is reserved for her final reader), as writing this singular won’t easily vanish as long as there are those who love the English language. Loudan’s charming and highly entertaining biography will help insure that longevity.

Transformed as I was into a public spectacle by Loudan’s book, though, nothing in it prepared me for my first attempt to swallow Ros herself in a large dose. I can safely vow that I have never before experienced such a response to literature. Opening Delina Delaney at random one night, I began to smile, then giggle, then a sudden spell of manic derangement seemed to take hold, propelling my mind into regions of disbelief and helplessness. One may note the instability of modern narratives, but it would be hard to find a work more capable of rendering language so nearly void of meaning – none, anyway, that could simultaneously provoke such breathless, unhinged laughter.

Passengers on my daily commute should be immensely grateful that I read Delina Delaney in the privacy of my home. I know I am.
Posted by seraillon at 2:28 PM