Down and Out and Proud in Cairo 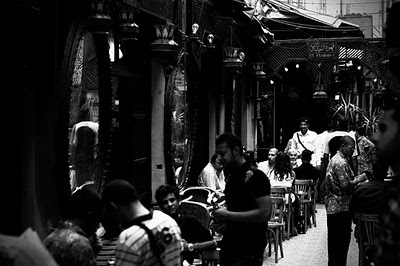 “The Café of Mirrors seemed to be a place created by man’s wisdom and set within the confines of a world doomed to sadness.” [photograph of Cairo’s Al Fishwary Café, a.k.a. the Café of Mirrors, by Hamad AlSarraf, used with his kind permission. More of Hamad AlSarraf’s photographs may be viewed at: http://www.hamadalsarraf.com/]

Egyptian-French writer Albert Cossery’s 1955 novel Mendiants et Orgueilleux commences with a scene unforgettable in its combination of squalor, grotesquerie, and gallows humor. One of Cossery’s principal characters, Gohar, is awakened in his derelict Cairo apartment by water swirling about the newspapers on which he makes his bed. When he at last identifies its source, it’s as though the water itself has metastasized into a symbol of the impoverished, sordid existence he leads and of the proximity of death. Not that he cares much, for the chief thing on his mind once he’s out in the deluge of activity in the streets is to find, as quickly as possible, his hashish dealer.

That the novel begins with a literal awakening is both an elegant literary device and perhaps a kind of joke, as wakefulness, for Cossery’s characters, is but a state where dreams and reality overlap. With a slightly somnambulant quality, his figures move through the world according to their needs, at times scarcely cognizant of a difference in value between life and death, alive to what’s around them yet each possessing a dream for a better future he perhaps knows that he’ll never attain. Yet within this conflicted space between dream and resignation, a fierce sense of pride and a constitutional determination to live free from the constraints of codes, laws, and material trappings exerts itself. Cossery’s “proud beggars” (the title chosen for a recently republished English translation) include Gohar, former professor and now ragged street poet; his supplier of daily hashish, the supplicating, scheming Yeghen; and their acquaintance El Kordi, a government functionary and sort of dandy whose vaguely revolutionary aspirations take a back seat to his love for a prostitute at the brothel to which all three are linked. It is here where the motiveless murder of another young prostitute has set in motion an inquiry, led by Cossery’s fourth main character, the depressive homosexual detective Nour El Dine.

While there’s a murder investigation in Mendiants et Orgueilleux, Cossery displays little interest in toying with the detective genre, or in any kind of literary gaming, for that matter. Sure, there’s a murder, but it’s practically incidental to the story, particularly since neither the killer - whose identity we know already from witnessing the murder - nor his companions seem to see anything terribly regrettable about the crime, with the inefficacy and moral vacuity of the police exposed as an even worse sort of indifference. Both crime and investigation seem an almost negligible, perfunctory set of events in this atmosphere of indifference and insolence, a minor and disposable tragedy in a world of more monstrous crimes that now possesses even the power to destroy itself - that one inhabits the lower depths of Cairo’s back alleys doesn’t prevent one from recognizing the criminality of the atomic bomb. And Mendiants et Orgueilleux is most certainly a novel of the lower depths, its pages populated with the poor and afflicted, from listless prostitutes to street children scrounging discarded cigarette butts, from a one-eyed policeman to a legless, armless beggar whose wife is jealous of other women given the earnings such a wretched state can bring in from the man’s solicitations.

As immediately evident in the arresting opening pages, Cossery’s sense of how to set up a scene is pitch perfect. Introducing his principal characters one by one in more or less separate scenes that unfold like set pieces, Cossery then brings them together in a culminating rendezvous in which the values of the street collide and co-mingle with those of authority in a black comedy quite literally of manners, since the extreme politesse of the meeting only amplifies its absurdity. Nour El Dine – sharing tea with his prime suspects in Cairo’s famous Café of Mirrors – finds his view of the world as something to be ordered coming up against beings who simply refuse to participate “in the destiny of the civilized world,” in any order whatsoever other than the exigencies of their needs and their dignity. The policeman is dumbfounded, for instance, at their suggestion that he dispatch his task by simply arresting one of them who has willingly admitted to the crime but who is clearly not the guilty party (the question of guilt or innocence seeming of little relevance). They take a polite but distinct pleasure in mocking the officer’s incomprehension and adherence to proper procedure:

“Does a motiveless crime fall under the purview of the law? Isn’t it essentially the same as an earthquake, for example?

“But man has become a misfortune to himself,” replied Gohar. “Man has become worse than an earthquake. In any case, he does more damage. Don’t you believe, Mr. Officer, that man has, for quite some time now, surpassed in horror the cataclysms of nature?”

“And the bomb!” said Yeghen. “Can’t you arrest the bomb, Excellency?”

“Then you’re paid to do nothing,” said Yeghen, “Since, to me, arresting the murderer of a prostitute seems nothing compared to being able to stop the bomb.”

Despite these memorable characters, the real star of Mendiants et Orgueilleux is Cairo itself, which Cossery indulges with rich, unflinching description.  There’s a gravitational pull in nearly all of Cossery's scenes towards the street, as though the crowded alleys and trams and sidewalks were dense, inescapable black holes into which the characters were involuntarily drawn again and again. These repeated sorties among the crowds seem to serve as entr’actes between Cossery’s set pieces, plunging the reader into the coarse, animated world of Cairo through palpable sensational touches: the odor of rancid onions on a woman in a tramway; the dry, mealy texture of pastries in a cheap patisserie; the cracked facades of storefronts; shadows in the maze of alleys. One is acutely conscious of the city pressing in and down on the populace, though not in quite the way one might imagine: despite abundant misery and the daily struggle to survive, Cairo’s streets hum and buzz with life and even a kind of joy squeezed from this jostling crush of humanity.

Amid this raw human cacophony, Cossery’s proud beggars find a degree of comfort shocking to bourgeois, materialist standards. They take their impertinent position in the lower depths as a point of pride and as insubordination to authority, which itself is portrayed as arbitrary and brutal, morally and spiritually vacant, devoid of the rich philosophy of the street. Rather than coming across as in any way polemical, this anti-authoritarian contempt reveals itself through the poetic wit (and street wits) of Cossery’s characters, whose indifference to power serves to undermine it. The strength of this subversion comes in part from Cossery’s refusal to reduce his characters to simple tropes: for all that Nour El Dine represents as an institutional foil to the others’ carefree defiance, he’s nonetheless a complex, even sympathetic character whose human faults plague him in much the same way that they seem to liberate others.

The novel’s final pages include a scene in which a simple gesture of humanity mixes compassion with abjection to produce the kind of pointed moral clarity one sees in Flaubert’s “The Legend of Saint Julian Hospitaller” when Julian crawls into bed with a horrifically afflicted dying leper. In the simple, matter-of-fact acceptance with which an unrepentant murderer administers aid to one of humanity’s most unfortunate members while one whose very job it is, ostensibly, to provide service and protection, looks on in horror and revulsion, Cossery delivers a caustic attack on the guardians of moral order - scoundrels all - who serve little more than “injustice and shadows” and a system designed to mask simple truths about power. But as Cossery suggests in this exceptionally rich, inimitable, ebullient, seamy, blackly funny and proudly democratic novel, even scoundrels wielding power are intractably stuck in the essential humanness with which we are all blessed and condemned.

Posted by seraillon at 4:29 PM