The Life and Times of J. 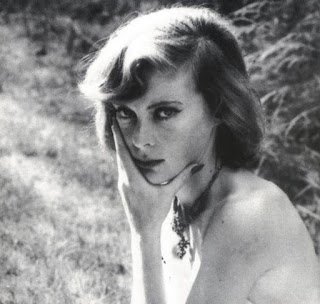 In the annals of sins of omission and unintended psychological cruelties, Caroline Blackwood’s early novel, The Stepdaughter, is one nasty little book. This epistolary novella takes place entirely within the correspondence of “J.”, a well-off New York divorcee (well, soon-to-be-divorcee) who, rather than communicate meaningfully with any real person, writes letters into the void (it’s a one-way correspondence in all but a metaphorical sense). This echo chamber finds its physical analogue in the luxurious high-rise apartment which serves as a cell from which J. spends her time peering out listlessly onto its breathtaking view of Manhattan and trying her best to ignore the impingements of the apartment’s other inhabitants: her four-year old daughter Sally Ann; Monique, the homesick French au pair sent over by J.’s former lawyer husband Arnold; and one very big, living, breathing problem, J.’s lumpish adolescent stepdaughter, Renata. These increasingly strident and desperate letters - which J. closes “Yours hopefully,” “Yours in a state of restless anxiety,” “Yours miserably,” and so on, in a disorder that mirrors her emotional condition - piece together for the reader how this menagerie of miserable females came to be, and read like searing, furious eruptions from J.’s incredulity at having arrived at such a state.

The unfortunate Renata, object of the novel’s title and undeserving target of all of J.’s unhappiness, is herself abandoned, with Arnold having decamped to France to pursue a nubile Parisienne and dumped on the unwitting J. this daughter from an earlier marriage (Renata’s mother, yet another unfortunate, is apparently confined to a mental institution in California). Shunned by the adults she’s known in her short life, and now sentenced to live with the latest one into whose neglect she’s been committed, the pudgy Renata spends her days padding back and forth between her room, where she does nothing but watch TV, and the kitchen, where she endlessly bakes and devours cakes from instant mixes “as if,” writes J., “she is hoping that in some camel-like way her body will be able to store them up and enable her to survive the desert future she fears must lie ahead.” J.’s obsessive letters reveal an unbearable, almost obscene tension between the sense of obligation she feels for Renata, whom she cannot see as anything but pitiable – an “ugly, untalented adolescent, whom no one wants” - and her own repulsion at this child who isn’t even hers and who seems to sum up, in her slovenly clothing and increasing girth, J.’s failed marriage and dimming prospects: “something even worse than my past: she is not only my present, she is also my future. That is why I find her presence in my apartment so intolerable.” Any care of J.’s own daughter, Sally Ann, has been relegated to the miserable Monique, who spends her spare time writing her own desperate letters of woe to friends and family in France, complaining of her awful employer and pining for the day her contract will at last come to an end.

The confined world that Blackwood depicts is nearly hermetically sealed off from the outside. J.’s letters to no one underscore the life that primarily unfolds within her own head. When at last she dares a moment of actual communication with Renata in an effort to rid herself of this unwanted burden, the result is nothing at all like the one that J.’s comfortable assurance has predicted, revealing Renata’s unhappiness as largely a projection of J.’s own and Renata as a perceptive child well aware of where she stands in J.'s world. J.’s solipsism takes a blow; the world delivers, in a single moment, a glaring, unexpected dose of reality out of sync with the ruminative narrative of J.’s own bitter thoughts, though in her quietly manic effort to tamp the world back down into something controllable and confined, she nonetheless wages a recovery.

The Stepdaughter might be an incredibly bleak depiction of psychological isolation, recrimination, and the banality of emotional neglect and cruelty were this wretchedness of female entrapment, rage and abandonment not leavened by the devastatingly dark humor of Blackwood herself. She’s such a razor sharp writer that one can’t help but laugh while simultaneously cringing at her perfectly-tuned formulations. As in the other Blackwood novel I read this year, Great Granny Webster, Blackwood proves a master of characterization (that she was once married to the late Lucien Freud, perhaps the world’s finest contemporary portrait painter, is an irrelevant bit of biographical trivia that’s nonetheless titillating to contemplate; in any case, Blackwood is at least every bit Freud's equal in the portrayal of human frailties, and certainly deserves as much renown as he). In both of these novels, Blackwood creates exquisitely drawn, almost archetypal characters one is unlikely ever to forget. Even minor characters are depicted beautifully with a few careful brushstrokes, as in the description of a cop summoned to J.’s apartment:

The police officer was one of those big, clumsy, bull-like men who move around very slowly and have tired little I-have-seen-it-all eyes. He had a scarlet neck which looked as if it had absorbed more experience than his face, and it came bulging over the collar of his uniform with every inch of its weatherbeaten surface decorated by the most unpleasantly elaborate lithography of deep cracks and creases, which were all overlaid by a feathery tissue of spider-web lines.

This talent for description and scathing, ironic humor makes The Stepdaughter’s nastiness almost bearable. To make the novel more palatable, I was tempted to imagine it as one of those histrionic Charles Busch plays, one of which I’d fortuitously read just prior to picking up The Stepdaughter. But for all the strident anxieties on the verge of a nervous breakdown in Blackwood's novel, The Stepdaughter is resistant to camp; her acute understanding of the moral psychology of her characters would make such a reading fall flat. One can’t help but feel for J., both victim and victimizer. Nothing in her emotional life is simplified or prettified. It’s as though Blackwood has stripped her down to bare her most hidden feelings in all their awful complexity, and what’s there is as honest as it is ugly. There’s an odd sort of bravery in that. But that those feelings remain, for most of the novel, transmitted only via these letters to no one, never to be sent, emphasizes in a piercing manner the complex tragedies born by a failure to communicate. This is a novel in which the characters have tenuous relations to begin with, but in the absence of communication they revolve awkwardly around one another like planets in a nebulous solar system without a sun, drawn and repelled only by their own gravitational forces. J.'s drawn out decision to speak to Renata, after so much time spent living among her own thoughts, leads to a conclusion not unlike a more high-pitched, post-Kafka version of the revelation of wasted life that occurs in Guy de Maupassant’s famous story “The Necklace.” There’s not a whole lot of consolation in learning the truth, but getting to watch it delivered with such psychologically incisive insight, crystalline clarity and caustic wit makes The Stepdaughter a deliciously horrible and haunting book.